‘Skyscrapers’ have shaped York’s skyline since 1850 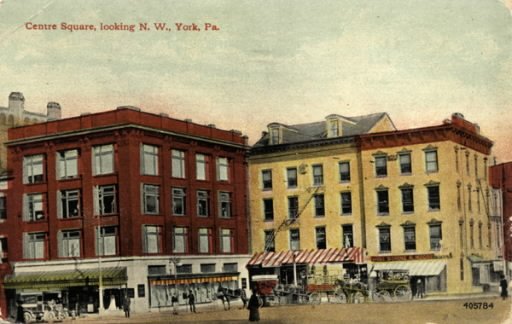 Former slave William C.Goodridge’s building sits in the middle of this northwest quadrant of Centre Square in this early 20th-Century postcard. For years after, Bear’s, then Zollinger’s and then One Marketway West occupied the site. Today, One Marketway has new owners. Also of interest: The story of former slave William C. Goodridge of York, Pa., would play well in Hollywood. Starring Poitier?

First, William C. Goodridge built his four-story building in the late 1840s on York’s Centre Square.
Actually, it could be counted as five stories with skylight windows.
Then, John Hartman out built him with a six-story building across the square.
Actually, the building had a cupola and a seventh story was reportedly later built. (To see drawings of the two buildings, visit: York landmark Futer Bros. building in new hands)… .

In the late 1800s, the Colonial Hotel across the street from Hartman went up to what appeared to be eight stories. But a fire took off its Mansard roof so did that make it seven?
A decade later, the Dempwolf-designed York County Courthouse came along with a 155-foot dome, possibly making that artful building the tallest.
In 1925, the Yorktowne Hotel went up, measuring 11 stories. That seemed to decide the race for height for decades.
Then in 2004, the seven-story York County Judicial Center was opened.
A York Daily Record/Sunday News reporter looked into its height versus the Yorktowne and wrote: “It boasts seven stories, making it the tallest building in downtown York, if you don’t count the flagpole on the Yorktowne Hotel.”
In 2008, those proposing the York Museum of Art have cast it at nine stories.
All this leads us to the question, how high is a “story” and can that change over time?
Perhaps the answer to the tallest building today rests in a file in a zoning office somewhere. But the discussion led some folks meeting on the YOMA building the other day to wonder if someone using Google Maps could figure out the tallest.
Things were much simpler in establishing the tallest building when Goodridge put up his four-story building.
Or was it four and one-half?

The York County Courthouse stood at the turn of the 20th century, flanked by the Security & Title Co. building, left, and the Marshall House, a hotel, right in this photo from Scott Butcher’s York, Postcard History Series. The courthouse is on a short list of the tallest buildings in York. Background posts: Restoring old Futer Bros. building’s integrity not hard, but costly, Buildings reveal a bit about York and York County … ‘A smorgasbord of architectural styles’