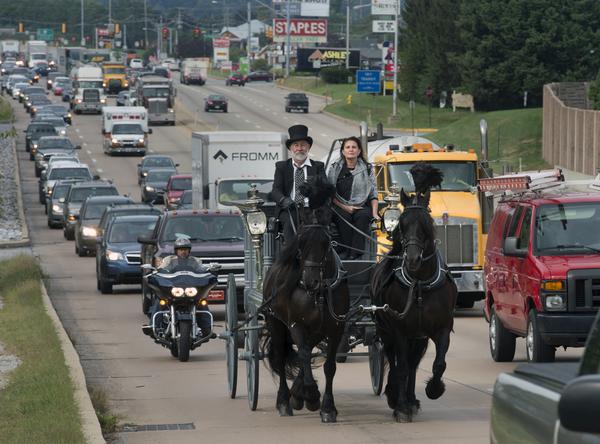 ‘A Horse drawn hearse built in 1913 makes it’s way down Route 30 in York,’ York, Pa., Daily Record photographer Paul Kuehnel tweeted. Before he died, New Cumberland resident and horse lover Carlton Lizotte smiled at the idea of a horse-drawn funeral procession. ‘So on Tuesday,’ the Daily Record reported, ‘Lizotte was taken in a 112-year-old hearse pulled by two Friesian horses approximately 2 1/2-miles from West Manchester Township to Prospect Hill Cemetery. A Korean War veteran who served in the U.S. Navy, Lizotte was buried with full military honors next to his wife of about 50 years. A great story – and photo. No doubt other horse-drawn funeral processions traveled along the route when it was known as Loucks Road. But the road has grown and this sight is rare. To see how Loucks Road looked before it became Route 30 by-pass, check out: My, how Loucks Road has changed. Also of interest: Prospect Hill Cemetery’s architecturally significant office well set among so much history

Neat, unrelated stuff from all over … .

Randy Harris is an authority on the Underground Railroad in southcentral Pennsylvania. So when he is hosting a URR tour – as he’s doing on Oct. 14 – he provides an opportunity to learn. The tour reservation deadline is Oct. 1. Details: AAA Central Penn. Here are some of the  planned stops on that tour, including some in York County, as outlined in an excerpted email from Harris:

– York County Underground Railroad paths, as detailed in historian Eric Foner’s new book, “Gateway to Freedom: The Hidden History of the Underground Railroad.” Local details were events that took place here in 1855 & 56 and extracted from the private journal of newspaper editor, Sydney Howard Gay (1814-88).  – Mifflin Family Farmhouse – “Hybla,” a drive-by its setting on the York County hillside overlooking the Susquehanna River just north of Wrightsville. From this site at the river level, Robert Loney, the boatsman, would ferry passengers on their way to freedom via stops on the eastern shore of the Susquehanna River and beyond. – The Columbia ​home of Judge Samuel Evans, almost entirely intact in its original form and appearance. – Location of Tow Hill — often confused and debated — where once lived the families of William Whipper, James Loney and other notable Columbia African Americans involved as agents of the Underground Railroad. – Columbia’s early Black settlers by name, ages and physical condition​- those who were formerly enslaved in Richmond, Virginia and manumitted​ in Columbia in 1819, establishing a larger ​settlement of free Africans that served to make Columbia a key Underground Railroad destination for the following 40 years. – Zion Hill Cemetery, Columbia​ – See the Civil War/USCT/Underground Railroad historical marker recently installed here. – Potter’s Field at Shreiner-Concord Cemetery, Lancaster, site of the grave and memorial of Thaddeus Stevens, located next to the burial ground of many African Americans. 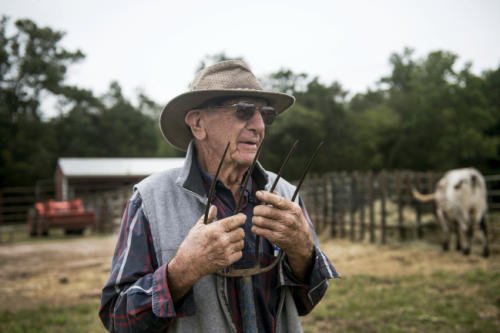 This is  Leo Lunger, who helps out his daughter and son-in-law at their spread on Tapeworm Road near New Oxford. This story is interest, partly because it involved Texas longhorn cattle, not common around here. And also because of the name of the road. This map might suggest how it received its name. Check out this Evening Sun photo gallery of the ranch.

Mason-Dixon came through here: York County, of course, sits on the Mason-Dixon Line. One of the instruments the British fellows used to run that line that defines the county’s southern border will be unveiled on Oct. 8 at a conference of Maryland professional engineers and surveyors. Details:  www.mdpels.com.

History Mystery: Many a fellow enjoyed the warmth of this fire over the decades. Fellow is right because women were not…