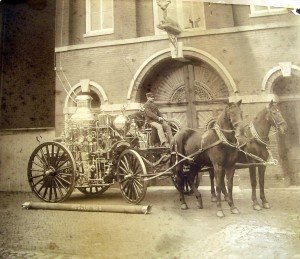 Rescue Fire Company No. 4, on York’s South George Street, was founded in 1872. It was home to the famous fire horse, Mack, as Dianne Bowders points out in her submission to ydr.com’s digital photo gallery Your Photos. ‘Old Mack, one of the horses from Rescue No. 4, served for 25 years. During a dash down a burning alley he was singed on both sides, but nursed back to health by the Company and was able to continue as a fire horse,’ Dianne wrote. The old firehall is now a private residence. Also of interest: Rex/Laurel, one of four York, Pa., operating fire stations, built a dozen years after Civil War

“Your article ‘Firehouses: Old and New’ caught my eye in this past Sunday’s paper. You mentioned Rescue firehouse which is my fiancée and I’s home. We fell in love with the charm of the building and purchased the house two summers ago.

“We have done some research since purchasing the home but really would love to talk to any firefighters who have worked out of the building. We have visited the Fire Museum but none of the regulars there worked from our building. If you have any knowledge or contacts of who might have worked here we would love to get in contact with them.

“Both my fiancée and I are transplants to York and are high school art teachers in the county. Our plan is to turn the first level of our house into an art gallery in the next several year and hopefully bring back the function of the building as a community gathering place.

“If you have any additional information or ideas of where to find contacts we would greatly appreciate it!”

Gordon provided additional info in a subsequent email, in addition to referring her to the book “York City Fire Department, York, Pennsylvania.”:

“By the way, did not know if you were aware that the statue outside of the Fire Museum was originally erected to honor Rescue firemen and was in neighboring Penn Park. The deer above the door to the Fire Museum was originally above the bays of the Rescue. And the Mack the fire horse monument at the museum pays tribute to the last fire horse at the Rescue.”

To which, Erin wrote:

“We did know about the statue and the deer. Someday we would like to find/ create a replica of the deer that is at the fire museum. We actually are currently renovating our garage bathroom in the garage which is where Mack’s stall was and we plan to put horse shoes in the ceramic floor as a way to pay homage to what the area of the garage was used for back then.”

So, if you have any other information on the old firehall, comment below.

Erin, with her art skills, is the very professional person that York City is seeking to attract to its downtown, tagged with the “Creativity Unleashed” theme.

Check out these photos and stories about fires and firefighters in York County, Pa.