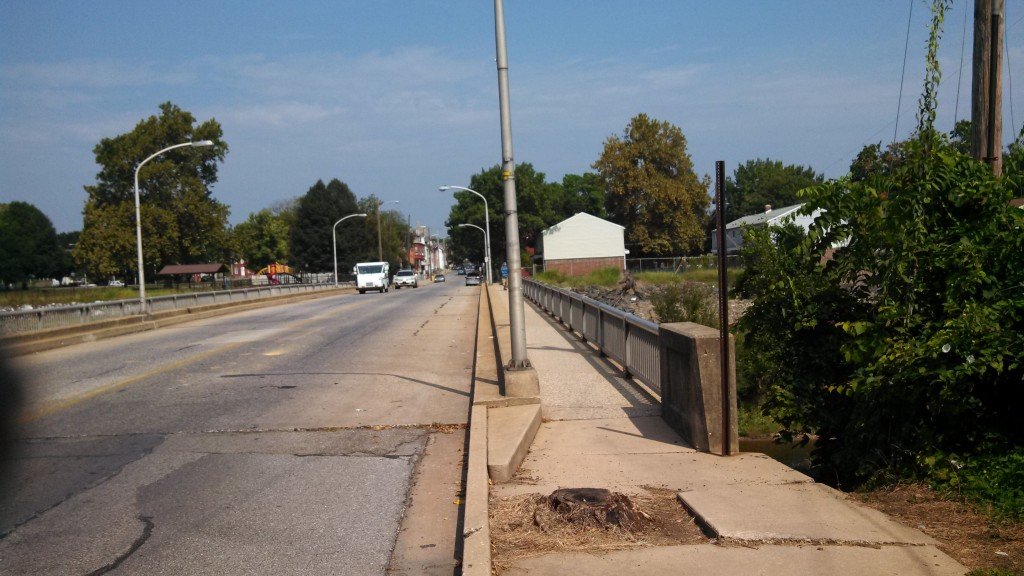 The Penn Street Bridge connects the expanding York College of Pennsylvania campus with the City of York’s downtown. So some in the city are seeing the importance of shoring up the neighborhood that welcomes students as they walk, drive or bike into the city. Check out this YCP map and see how the middle part of campus bulges northward into the city. Also of interest:  Old King’s Mill-Smurfit Stone site giving way to information age. 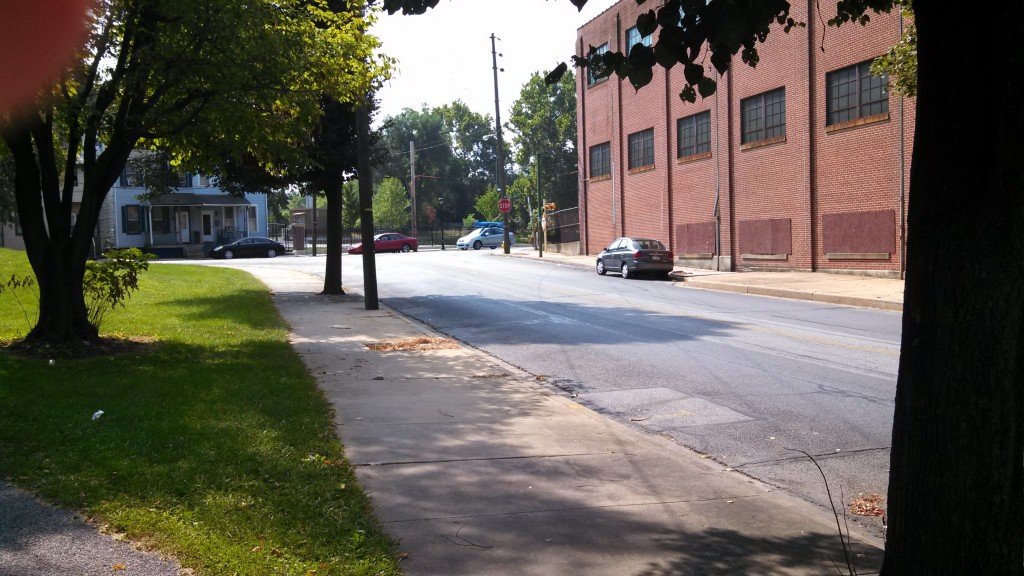 This is the scene looking south from the bridgehead on Penn Street. That’s the old King’s Mill/Smurfit Stone site, owned by York College, on the right. The green space straight ahead, south of the line of vehicles, is York College’s campus. The York County Heritage Rail Trail runs north/south at left, out of the frame.

The College Avenue Bridge was built to accommodate four-lane traffic passing under its approaches.

The Market Street Bridge – or rather its first patriarch – helped place York on the map. It marked the spot where the Monocacy Trail crossed the Codorus Creek in the 1700s. York grew on both sides of that bridge.

But the Penn Street Bridge is a symbol – and then some.

It marks the spot where York College of Pennsylvania and the city meet – where YCP’s campus comes closest to the downtown.

Two city leaders mentioned that proximity recently, pointing to the need for the nice new affordable housing units, Homes at Thackston Park, and much-desired green space along the creek created when old public housing units come down. This project is another  example of efforts to improve the creek front from the downtown to the city lines and beyond.

So when YCP students from the college’s burgeoning west campus come to town, they’ll pass the old Stone Container site, thus leaving campus. By now, they’re in the city, but by crossing the Penn Street Bridge, they’re close to the downtown. At this point, they’re only a few blocks from Penn Street Farmers Market and then only a few more from the growing Beaver Street arts district.

The bridge, thus, serves as another connector in strengthening the marriage between the college and city.

One finding is that the presence of Franklin & Marshall and Lancaster’s medical community was stronger in that city’s downtown compared to York’s.

The Penn Street Bridge is an unsung, potential binder of town and gown. 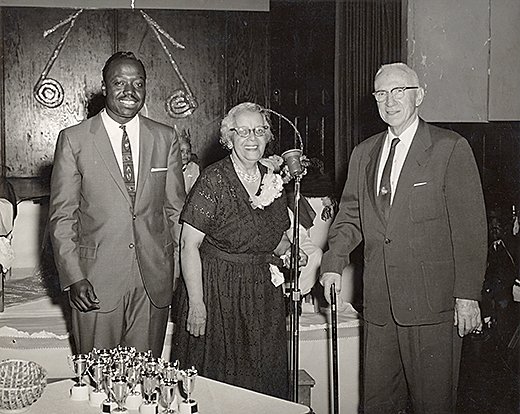 Homes at Thackston Park is a new affordable housing complex northeast of the Penn Street bridge. It replaces many crumbling public housing units near the head of the Penn Street Bridge. ‘Thackston’ in the complex’s names comes from Helen Reeves Thackston, center, longtime preschool director at Crispus Attucks Community Center. Voni B. Grimes is seen at left and the man at right is unidentified.