Moravian congregation, like others in York County, drew on faith in the American Revolution 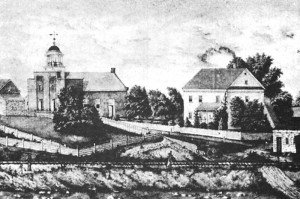 Moravian Pastor George Neisser, writing in his journal from the York, Pa., congregation’s Gemeinhaus, provided a glimpse into everyday life in York Town during the Revolutionary War period. What he left for posterity was a message of struggle – and hope.The Moravian worshipped in those days in this church building, West Princess and Water streets. (Click on image to enlarge; see window from current building below.) Also of interest: Civil War Easters 1861 & 1865: Hope for the world is constant in past and present wars.

I wrote this editorial appearing in the York Sunday News, Easter Sunday, 4/8/12… .

Pastor George Neisser and his York congregation had suffered along with the rest of York County – and the 13 Colonies – in the American Revolution.

His Moravian denomination held a pacifist position, and some members of his congregation, at West Princess and Water streets, became conscientious objectors.

Pacifism in time of war is a principled position, and certainly not an easy one, as the Rev. Neisser outlined in regular journal entries.

Some of his congregation, in fact, put on uniforms, and older men in the church served with local groups that supported the military. Indeed, the Tory threat was such that guards had to be attached to them so they could do their work.

The Moravians paid the same high taxes, inflated prices and endured the same food scarcities as others in times of this war for independence.

The Continental Army sought his church building, also his family’s residence, for the recovery of soldiers. When the pastor protested that this would disrupt church and school activities, they moved the wounded to houses of his congregants.

Many of those congregational caretakers – like many citizens of York – were not well themselves in that long war.

And when the military sought to press his building into service as a slaughterhouse, his congregation found another venue.

Although Cornwallis’ surrender at Yorktown, Va., technically marked the war’s end in 1781, it didn’t mean the war was ended in and around York Town, Pa.

A prisoner-of-war camp, Camp Security, went up east of town in that year, and British prisoners roamed the streets of York. Authorities allowed them this parole within prescribed distances of the prison camp.

Those Redcoats were a nuisance and worse.

The Rev. Neisser said they tormented – abused in modern terms – his congregants and no doubt other York residents.

“This afternoon Mrs. Maria Billmeyer called,” he wrote, “who deplored the wickedness of the British officers and their servants, who act like brutes, and curse those who do not submit to their lustful desires.”

And he had concerns for the young in his congregation after their encounters with the British prisoners.

“There was much complaint of the ungodly and irreverent conduct of the young people,” he wrote, “who said that they would turn Englishmen and become infidels.”

Indeed, the eight-year American Revolution was a slog for all kinds of reasons.

People today are celebrating Easter – the day Christians observe the life, death and resurrection of Jesus.

They believe that Jesus’ resurrection means a similar hope for them after death. And the happenings at Easter also offer hope, strength and meaning for Jesus’ followers on earth.

Clearly, the Rev. George Neisser, his congregation, and many newly minted Americans across the Colonies drew on that strength in that long war.

One story from the pastor’s journal illustrates the outworking of his faith, even as the American Revolution was ending.

It was the summer of 1783, just months before the Treaty of Paris concluded the war.

Continental Army soldiers still occupied York in the weeks after those problematic prisoners from Camp Security were leaving.

The Rev. Neisser wrote: “I visited a blind negro woman and comforted her yesterday; she was insulted by a soldier, and had become much excited. The soldier was soon after thrown into prison for other excesses.”

Consider this act of ministry.

The pastor gave comfort to a woman. In 1783, females had limited property rights and, of course, could not vote.

He helped a black woman, perhaps a slave or servant. Blacks in Pennsylvania were gaining their emancipation gradually, but York County ranked second in number of slaves in Pennsylvania in 1790.

The woman was blind, a person with special needs, a group of people who remain underserved in America today.

And she was insulted, perhaps even assaulted – a victim.

Even that victimization did not place the soldier in the slammer. Other offenses did that.

Here was Pastor George Neisser, drawing on his faith, to comfort the least of these, eight years into a frustrating war. 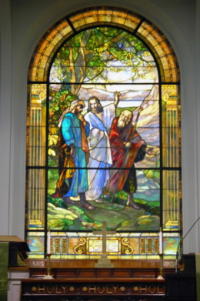 Other holiday-related
York Town Square posts:
Pre-World War II Thanksgiving holds lessons for York countians today and Henry Laurens’ Christmas in York Town: ‘I will not quit my post, although I … fear that I may perish on it’ and ‘Sandpaper Sisters’ rubs readers right way.