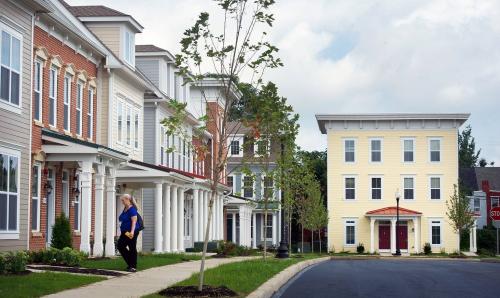 York’s first public housing units came on the scene in 1954. Almost 60 years later, residents are leaving crumbling units and moving to the nearby York Housing Authority’s Homes at Thackston Park, seen above. So the former Thackston Park is now home of a $12 million, 39-unit affordable housing complex. And an attractive one at that. The next phase calls for the original units to come down, and their old footprint will be converted into a park, a greenway next to the Codorus Creek. Also of interest: Thackston Park connects to the past.

In all of the coverage of the attractive new affordable housing unit Homes at Thackston Park, we should not forget the namesake of all this.

Who was Helen Thackston?

We’ll let community leader Ray Crenshaw tell about the early childhood learning leader at Crispus Attucks: ‘All the children of York were hers’ .

A look at the old and new in the Thackston Park area.

Check out these yorktownsquare.com stories and photos about black history.