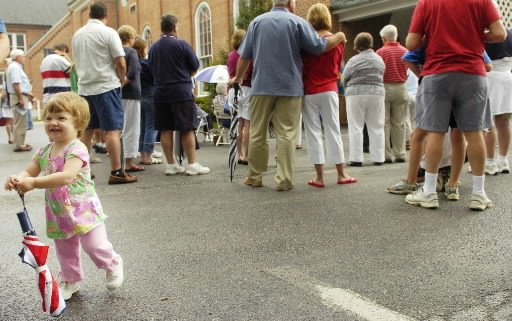 The burial site of York, Pa.’s Declaration of Independence signer James Smith sits next to First Presbyterian Church, background.Here, a youngster is less than captivated by the annual Fourth of July memorial service at Smith’s gravesite. Smith died in 1806. The church is preparing for its 250th anniversary in 2012.  (See additional photos of the church below.) Also of interest: 1776 Declaration of Independence reading in York Town re-enacted in annual ceremony.

Charles Letocha is researching First Presbyterian Church’s history – all 250 years of it – and is looking for a few good answers.

First, Cindy and Jeff Lobach, authors of the church’s 250th history book are searching for a missing tombstone, James Smith’s in fact.

“In 1887 … the stone home in which he had lived on S. George Street was due to be demolished. At this time a large, flat tombstone, with a lengthy epitaph in memory of James Smith, was found in the basement of this home. I do have information on the epitaph, but not on whatever happened to the stone. Maybe the stone was the one originally placed on his grave at 1st Pres. before the DAR placed the current stone there. (There is also no data on when the current stone arrived, although if the DAR actually placed it, information on this may be available from them.) If so, why would the original stone have been removed and moved into the basement of his former home? But I was particularly interested in knowing what happened to the original stone and its location today.

“2. Is there any information of the manufacturer of the side windows in the sanctuary?  These were installed in August-October, 1892 at a cost of $200 each.  I do not believe they were made by Tiffany and they definitely were not by J. Horace Rudy.

“3. Are there any known portraits of the following people:

“4. Is there an image of the Rudy Studio at 601 North Hartley Street?

“It would be nice to get as much information together now to save future researchers a lot of time and effort.”

A wonderful result of such celebrations as that planned at First Pres  is that history’s mysteries sometimes are solved. 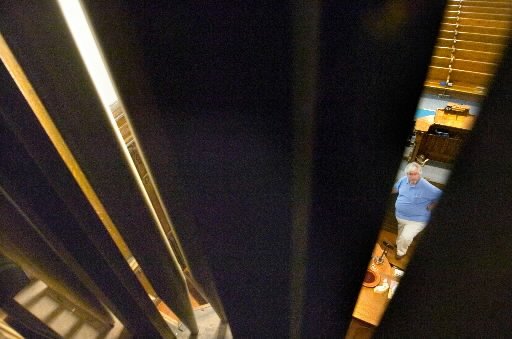 James R. Spark, First Pres’s director of music ministries, is seen through the façade of pipes that are part of the church’s organ. The church later rebuilt and upgrade the pipe organ. 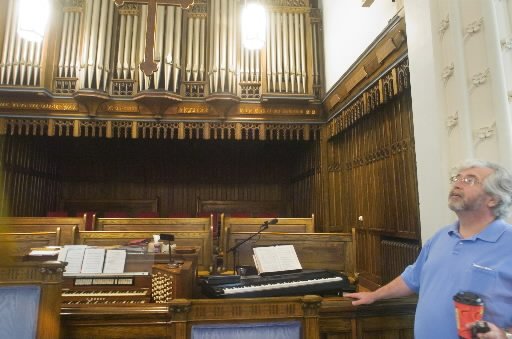 Back at ya. The view of the pipe organ from the sanctuary.