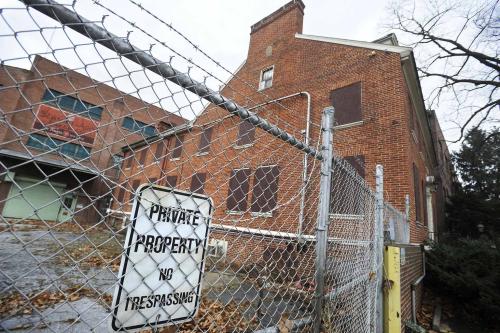 King’s Mill Manor House is celebrating its 200th anniversary this year. Or maybe not celebrating. It’s deteriorating near the old mill on the bank of the Codorus Creek. Fortunately, York College of Pennsylvania has plans for the house. Also of interest: King’s Mill building wins award; Philip King mansion could become public safety building.

The caption on this ydr.com story – Historic house at center of squabble between former owner and York College – about the Philip King House provides a  summary of its status: 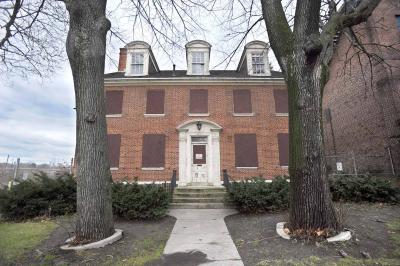 Another view of the Philip King House, courtesy of ydr.com.

“York College owns the Old Manor House, built in 1812, at 427 Kings Mill Road. The previous owner says the college let it deteriorate and wants it to be preserved. The college says it was already deteriorating when it bought the house, and the college does have plans for the house.”

What shape is the house in?

The ydr.com story gives this appraisal from Historic York:

Alycia Reiten, executive director of Historic York, said she hasn’t been inside but the building appears from the outside to be “in really good condition.”

The mortar isn’t damaged, and the roof looks to be in great condition, she said. There are some broken windowpanes, she said, but they are easily fixed. She noted that the windows were boarded up in a “respectful way” to maintain the openings.

The building is one to be celebrated, she said.

“It’s not one we should be saying, ‘Oh dear, it’s crumbling by the wayside’,” she said. “Its life still appears to be strong, and the folks that own it have a good reputation for recognizing historic characteristics.”

She said that Historic York has offered its services to the college if needed.

The ydr.com story raises questions about the condition of its interior as it’s headline suggests: “Historic house at center of squabble between former owner and York College.”

Let’s all hope for a bright future for the house that Philip King built. 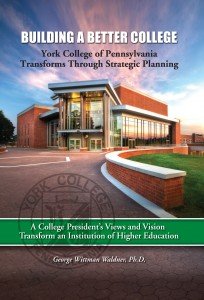 While on the topic of York College, a bit more about soon-to-retire York College President George Waldner’s book:  “Building a Better College: York College of Pennsylvania Transforms Through Strategic Planning” in this ydr.com story. The story tells about the college’s plans for the next five years, based on info found in the book. And for even more on the book, check out Cram Session blog.