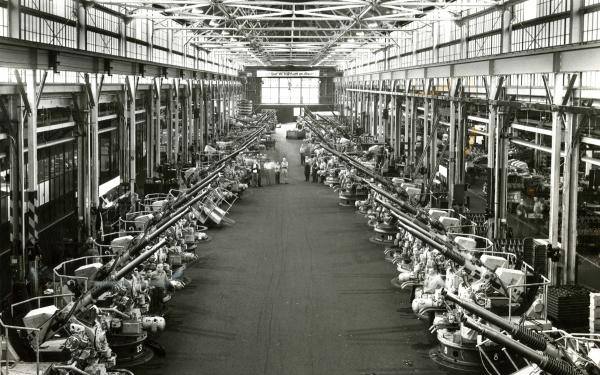 This photo shows 40 mm anti-aircraft Bofors made at Blaw-Knox Special Ordnance Division plant during World War II. Those guns were America’s best defense against Japanese suicide attacks late in the war. For years, the York Safe and Lock-made Blaw-Knox plant was incorporated into Harley-Davidson’s sprawling complex. Background posts: AMF-Harley in York, by the numbers and York Safe & Lock worker recalls chat with Hedy Lamarr.
The York Safe & Lock / Blaw-Knox Special Ordnance Division / Naval Ordnance Division / AMF / Harley-Davidson plant near the Narrows north of York has always been associated with robust output.
That’s why it has been visited by admirals and U.S. presidents.
But how robust is robust?…

Consider these numbers of Bofors anti-aircraft guns manufactured at the plant during the war, posted on a World War II display at the Agricultural and Industrial Museum in York. The output would equipment a fleet equal to: