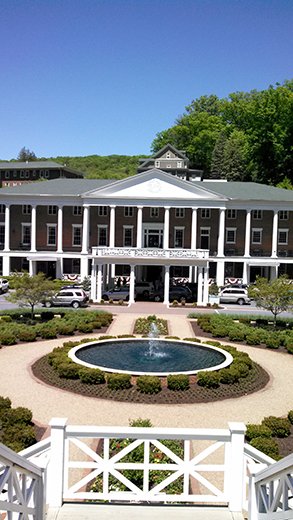 The Bedford Springs Hotel is a must-visit if you’re in Bedford, Pa. The Omni resort takes you back 150 years when President James Buchanan visited there. You don’t have to stay there to enjoy the resort. Walk-ins can eat at its restaurants, enjoy its spa and visit its shops. Or just sit in its library and soak in the history. Also of interest: All roads lead to York, Pa.: Whiskey Rebellion linked Bedford and York counties. and Yorkers are discovering Brigadoon-like Bedford, Pa., Part II.

I compare the getaway town of Bedford to the mythical town of Brigadoon, made famous by Gene Kelly and Cyd Charisse in the movie so named.

It’s almost too good to be true.

It’s a town with a resort, Bedford Springs, whose beauty on a sunny day is almost beyond description.

But it’s more than a resort town.

It’s a place with its own two-screen movie theater. “We’ve been in business since 1939,” The Pitt’s website states, “and, call us old fashioned, but we still
believe that going to the movies is a special event.”

The theater, which limits its previews to three, adds a flourish. Between the previews and the opening of the main features, it shuts its curtain and then opens it. The main show is thus unveiled.

It’s a town with a family-owned motel, Judy’s, in which the owner will walk you to your room to ensure it’s clean and ready. And it always is.

Bedford is a town with a coffee shop, HeBrews Coffee Company, where you can sit unrushed all day, if you choose.

Those little touches add up.

And the dining in Bedford is varied, which keeps it interesting. One of its finest restaurants, Jean Bonnet’s Tavern, is operated by a former York countian, Shannon Jacobs of Dover. (This proves that all roads lead to and from York.)

And of course, Bedford has its history, particularly as the town where President George Washington set up his headquarters to quell the Whiskey Rebellion in 1794. (He passed through York on that visit.)

After a visit to Bedford, you want to be like Gene – Gene Kelly, and his Brigadoon character, Tommy, that is. His last visit to Brigadoon ended with the village – and Tommy – happily fading back into the Scottish mist, not to return for 100 years.

Bedford County joins York County is boasting of a Gravity Hill, where you appear to coast uphill. 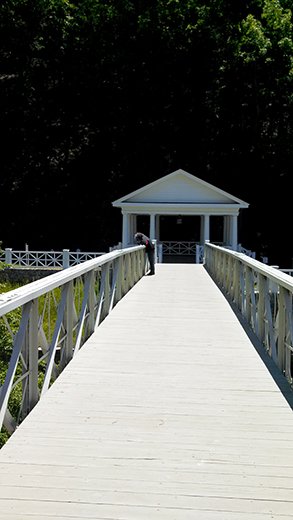 The top picture is taken from the walkway leading to one of the springs that gives the Bedford Springs hotel its name. Turn around and you see one of the springs, above, showcased with a columned structure. Hiking trails wind along the hills behind the spring. Bedford is about two hours west of York on the Pennsylvania Turnpike. If you go via the Lincoln Highway, Route 30, leave at least three hours. Also of interest: Visit with former president James Buchanan: Talk did not touch on matters of state.