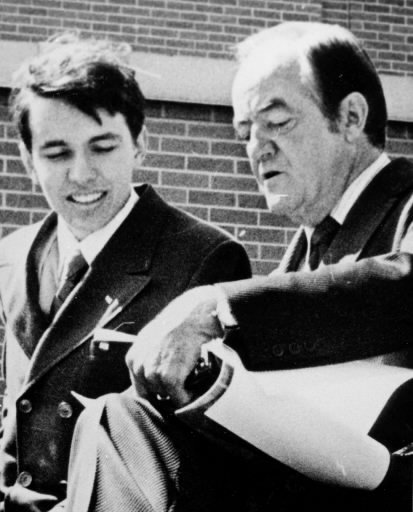 John Burke Jovich has met eight American presidents so far.
And that’s not all.
Here is another feat listed by this student of the presidency who lectures, writes and consults on the presidency and who calls York home: … 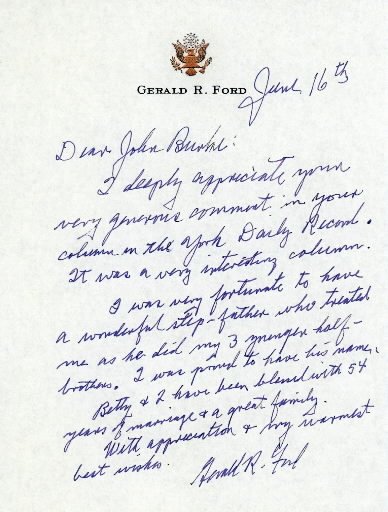 Gerald Ford wrote John Burke Jovich a note of thanks after Jovich’s column on Ford appeared in the York Daily Record in 2004.
During research in 1982 of never-before-published papers belonging to the late Vice President Alben W. Barkley, Jovich discovered a highly classified memorandum addressed by President Truman to Barkley. Truman revealed his intention to fire Douglas MacArthur long before the general’s stormy departure from Korea. That discovery drew national attention.
Jovich occasionally writes op-ed pieces for the York Daily Record/Sunday News. One 2004 column on former president Gerald Ford drew a hand-written note of thanks from the former president.
Here’s that column:

The summer of 1974. The weather was hot and sultry across most of the nation. Paul McCartney and Wings sang of a “Band on the Run,” while Maria Muldaur suggested we put our camels to bed in her steamy hit, “Midnight at the Oasis.” The Godfather II became yet another offer we couldn’t refuse at the box office. And Evel Knievel was breaking records (not to mention bones) in well-publicized motorcycle stunts. Former Sheriff Buford Pusser of “Walking Tall” fame was killed on a Tennessee highway and a man of more heroic proportions, Charles A. Lindbergh, died in Hawaii.
But most of the nation’s attention, and discontent, was focused on the televised Watergate impeachment hearings. And it wasn’t long before the House Judiciary Committee concluded that “Richard M. Nixon has acted in a manner contrary to his trust as President and subversive of constitutional government, to the great prejudice of the cause of law and justice and to the manifest injury of the people of the United States. Wherefore, Richard M. Nixon by such conduct, warrants impeachment and trial, and removal from office.”
Despite all his achievements in international relations, President Nixon, Americans discovered, had lied about the Watergate break-in and attempted to cover it up. By the end of the first week in August, even Nixon’s staunchest Republican supporters in the House and Senate had felt the sting of his deceit and asked the president to resign. When Nixon delivered his farewell address in the East Room of the White House, he praised his late mother and lavished kudos on Teddy Roosevelt, but spoke not a word about his tormented wife, Pat, standing at his side.
Enter Gerald Rudolph Ford, 38th President of the United States. Americans knew little about him. He had been appointed vice president the previous December, and now he assumed the presidency without having ever won a national election.
Jerry Ford was not the ostentatious type. On the morning of the day he became president he prepared his own breakfast without the benefit of a cook and donned his clothes without the assistance of a valet. But the more interesting historical footnote is the fact that Ford had no presidential ambitions to begin with. His ultimate political goal was to become Speaker of the House of Representatives; the Oval Office was a place for the more recognized of his party to salivate over, such as Nelson Rockefeller or John Connally or Ronald Reagan.
Countless Washington insiders who had known both Nixon and Ford couldn’t help but notice the marked contrasts in their personalities and administrations: Nixon could be a compulsive liar; Ford trustworthy and credible. A debate with the ever-suspect Nixon could result in repercussions down the road, whereas Jerry Ford knew the value of disagreeing without being disagreeable. Nixon’s White House felt imperious; Ford’s seemed friendly.
It no doubt haunted Ford to know that his three immediate predecessors departed the White House under tragic circumstances. John Kennedy was murdered. Lyndon Johnson was vilified over our involvement in Vietnam. And Nixon, of course, was toppled from office by the worst political scandal in U.S. history.
But Ford also had the advantage of having known these presidents, and their limitations, all the way back to his earliest days in Congress. He was well aware of Jack’s womanizing; Lyndon’s cajoling; and Dick’s paranoia. Their behavior was enough to cause any person of good character to become an even greater epitome of decency.
In just the first several weeks of his presidency, Ford quickly surmised that the only way to restore the trust of the American people in their government was to put the caustic issue of Watergate behind us and get on with the business of governing. The venomous hate many possessed toward Richard Nixon continued to take center stage. With the certain knowledge that the decision would mean digging his own political grave, Ford, only one month after becoming president, pardoned his predecessor “for all offenses against the United States.” No single decision of Ford’s 2 1/2 years in office would be so highly criticized.
But Gerald R. Ford succeeded in focusing our nation’s attention on the issues that mattered most. He granted clemency to thousands of Vietnam-era draft evaders, much to the dismay of veterans organizations. And yet American troop involvement came to a complete end during his administration. Ford also vetoed numerous congressional bills in a responsible attempt to reduce federal spending and stem the rising tide of economic inflation.
Two assassination attempts were made on President Ford’s life in September 1975, both of which he calmly defined as occupational hazards of the office he held.
On several occasions, when Ford’s knees went out as a result of old injuries from his college football days at Michigan University, he was roundly lampooned by the media and comedians alike. But this most athletic of all our U.S. presidents took it all in stride and even wrote a book titled “Humor and the Presidency” after he left the White House, in which Ford good-naturedly recounted the jokes and editorial cartoons made at his expense.
In the presidential election of 1976, Gerald Ford lost the White House to Jimmy Carter by a razor-thin margin. So close was Ford’s defeat that it was obvious his unpopular pardon of Richard Nixon in 1974 had cost him election in his own right.
Thirty years later, however, Americans remember former President Ford, now 91, as the impeccably honest leader he was — one who did not suffer from an inflated ego or illusions of grandeur — one who healed our land and restored our nation’s highest office from one of scorn and ridicule to its proper historical perspective.
On January 20, 1977, the first words spoken by President Jimmy Carter at his inauguration were, “For myself and for our nation, I want to thank my predecessor for all he has done to heal our land.”
Jerry Ford. Not a bad president after all! 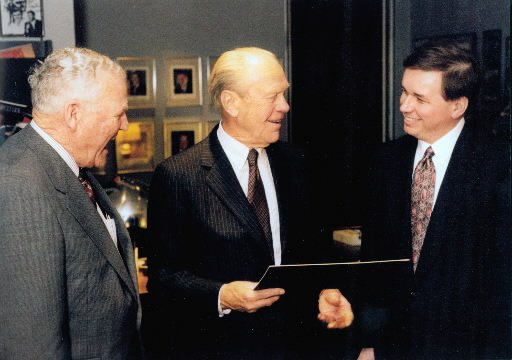