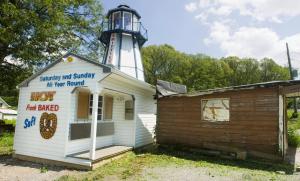 Motorists who drive by the Smittie’s Soft Pretzel stand in Dover Township might not recognize this as the headquarters for this York County landmark.

Bury’s Burgers, Melvin’s Drive-In, Playland, White Oak Park, Shady Dell are among the York-area icons we’ve explored in this blog.
Places like these continue to provide a mountain of memories – a kind of group recollection – that act as magic glue making a community a community.
Now come two others for the list: Bricker’s French Fries and Smitties Soft Pretzels… .

Bricker’s Web site tells about this company, with its ubiquitous french fry stands, and its unusual past:
Curvin L. “Bud” Bricker owned Newberry Township’s Susquehanna Speedway in 1965 when the race track began selling french fries.
The concession business took off, later becoming known as Bricker’s Concessions Food and Games.
In 1992, Bricker’s returned to the exclusive sale of food products.
Today, Bricker’s Famous French Fries operates more than 30 french fry units. That’s why you see them everywhere.
As for Smitties, here’s an excerpt from a York Daily Record report on this landmark company a few years back:

Get him (owner Todd Smith) talking and he’ll tell you how his grandpa started Smittie’s Pretzels in York’s Gas Alley after the bread company he worked for went out of business. He’ll explain why they make soft pretzels rather than hard ones (too much competition) and tell you that although the recipe is a mix of Pennsylvania Dutch and German formulas, the details are a family secret.
“The only place it exists is in the Smiths’ heads,” he said. “When the family line ends, the company ends with it.”