York/Adams residents contributed to ‘The War’ 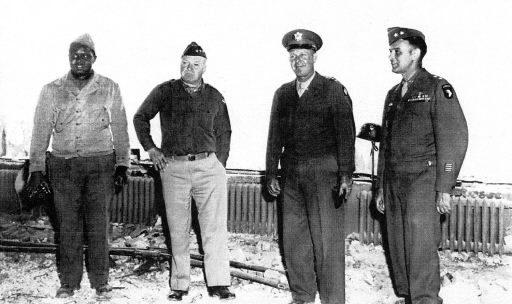 The airing of Ken Burns’ “The War” prompted me to write a primer on local World War II highlights in the York Sunday News.
I included my two favorite local stories as part of that piece, titled “York/Adams residents contributed to ‘The War.'”
The first one brings together the type of contributions to the “Arsenal of Democracy” by farm and factory:

Factory space is so scarce in York that one small businessman, Charles Coffey, set up a machine shop in the end of City Market, where farmers still sold their wares. He crafted parts for York Safe & Lock machines that, in turn, made armor plates.

The City Market, now demolished, was the largest and most ornate of the five covered market houses in York.
This was, indeed, an example of farm and factory literally working together… .

It also marked a continuation of industrialization and development overtaking agrarianism as the prime force in York County.
As I’ve explained in a previous post, the symbolic moment commencing that battle came in 1887 with the unannounced, middle-of-the-night demolition of outdoor market sheds on York’s Centre Square. People and product needed to move through the square and the market sheds were in the way.
Interesting that the City Market itself fell prey to development. It was demolished in the 1960s, and a gas station stands on part of its footprint. (For several posts on York’s five market houses, search for “market” on this blog.)
And a second favorite story involved a note back home from a wounded soldier, Ross Kurtz. Notice the low-key manner in which he explains massive injuries to his former co-workers at York Corporation, now Johnson Controls:
He wrote that he got in the way of a mortar shell in Italy. His stomach was badly mangled. His hips and arms caught some shrapnel, too.
“However my face did not fare as well,” he wrote.
Shrapnel hit above his mouth, smashing out all his teeth on the right side of his jaw. It broke several facial bones and the roof of his mouth. Later, doctors found that his lower jaw also was fractured.
“It looks as if Kurtz is going to have to keep his mouth shut for awhile,” he wrote, “as they are going to wire together what teeth I have left.”