York Valley Inn: ‘What a mess’ 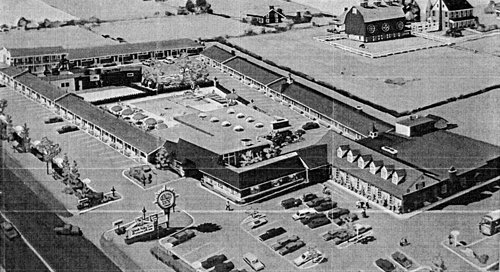 Springettsbury’s York Valley Inn is one of those landmarks that always spawns memories. Swimming lessons. Fine dining. Anniversary parties. The motel complex, as seen in this drawing found in the file of artist Cliff Satterthwaite at the York County Heritage Trust, kicked off in 1958 and closed in the 1990s. Background post: Forgotten York Valley Inn may be rediscovered.

Gordon Freireich’s York Sunday News column (see below) points to the magnitude of the recently fire-damaged York Valley Inn in its day.
“The York Valley Inn was such a big deal because – well, it was big deal,” he wrote.
The size of the resort and convention center went beyond it’s 165-rooms.
According to “Greater York in Action,” it sported: …

It was even large enough to show off new cars indoors.
Gordon’s memories follow:

Now, that’s just weird.
A few days before a blaze ripped through a section of the York Valley Inn along the 3800 block of East Market Street, I drove past the sprawling, vacant, boarded-up motel.
“What a mess,” I thought to myself. “That place is just aching for an arsonist to start a fire there.”
Little did I know. . . .
The old motel complex has become an eyesore in the nine years since it closed its doors. Some windows are boarded up. It looks as if loose shingles sit atop the roofs. Despite my thoughts, the cause of last weekend’s fire has not been determined.
I remember the York Valley Inn as a modern, vibrant place.
Its Sword and Shield Dining Room was a popular place to go for dinner.
One of the banquet rooms was where we held my parents’ 30th wedding anniversary party in 1967. That was a special event for me because it gave me an opportunity to introduce my future wife to our extended family and my parents’ friends. I vividly recall the debate: should we tell my folks about the party – it was planned as a surprise – in advance, or just have them walk in and be shocked? Since my parents were in their late 50s then, we thought we should tell them because we didn’t know what the shock would do to their systems. Late 50s! What did we know? We were much younger then.
We wound up telling them a day prior to the party. They just acted surprised when they got there – even though my mother had raced off to the beauty parlor the day before when we sprung the news on her.
The York Valley Inn was such a big deal because – well, it was big deal. With many rooms for guests, a dining room, reception rooms and a swimming pool it was the last word in comfort for travelers.
According to the 1968 edition of “Greater York in Action,” the York Valley Inn opened on a much more modest scale. “Started in 1958 by Herman Niessen as a 25-unit motel, the Inn under the guidance of Niessen and Manager Alfred Goldstein has grown to a sprawling 165-unit establishment that is practically a complete resort in itself,” the article in the book states.
The article continues: “A resort motel in the true sense of the word, it has a game room; Finnish dry sauna baths, a masseur and masseuse; an indoor, heated swimming pool; an Olympic-size outdoor pool with separate diving area; an ice skating rink with ice-making equipment that is in use from December 15 through March 15; a beauty shop, a barbershop with male hair stylists; a complete Health Club with many York residents among its members; and an unusual gift shop filled with intriguing items from all over the world.
“Erected on land once granted to William Penn, the Inn uses old English decor throughout . . . and guests receive an authentic William Penn welcome from costumed hosts and waitresses.”
Niessen and Goldstein were apparently ahead of their time in promoting York County as a tourist destination to fill the rooms in the motel. “Their contributions to the community include two slide programs, ‘Yesterday in York’ and ‘An Armchair Tour of York’; and a 25-minute full-color film of York and York County titled, ‘Let’s Go Dutch – York, Pennsylvania, Style,'” the book reports.
It would be a shame to see the York Valley Inn property demolished. But, then again, it’s a shame to just see the once-prominent property – that evokes so many memories – just sitting there and aging.