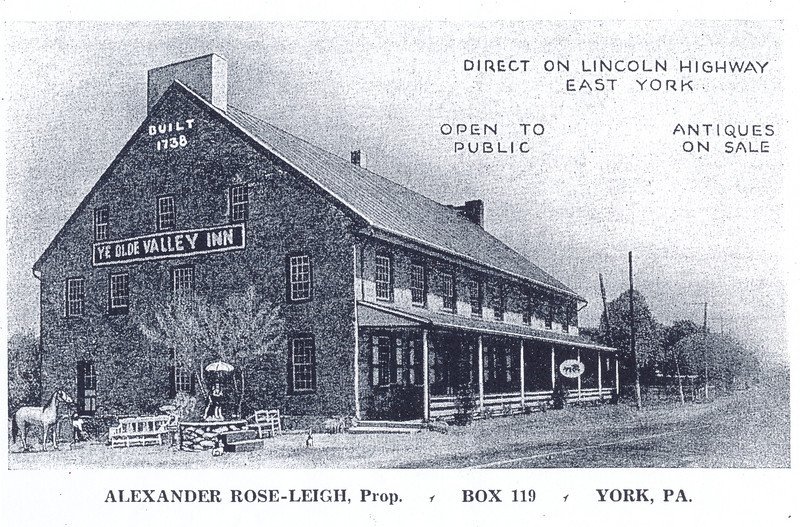 A post-World War II baby boom, the entry of Caterpillar and other industries in the early 1950s and the erection of Springettsbury Township’s York County Shopping Center, seen across the middle part of this photo, in 1956 caused additional traffic on the old Lincoln Highway. That highway runs across the top of this photograph. A road-widening project in 1962 to accommodate all these new motorists spelled the end of the old York Valley Inn, seen at 11 o’clock here, across from the Playland pool. This 1700s stone building is not to be confused with a 20th-century restaurant/hotel complex farther east on the Lincoln Highway. (Photo courtesy of York Buchart Horn and J. David Allen.) Also of interest: Olde York Valley Inn confused with historic predecessor and Forgotten York Valley Inn may be rediscovered and Check out this drawing of the York Valley Inn at Susquehanna Memorial Gardens..

An upcoming road-widening project set for a stretch of the Lincoln Highway east of the Route 24 intersection in Springettsbury Township brings to mind a recent conversation with Mary Arcuri and her husband Buddy.
They remember a road construction project in that area, but workers that time plowed under the berm and close-by buildings west of that intersection.
Mary called to discuss the work artist Cliff Satterthwaite undertook for their restaurant, The Carousel Room, in the 1960s.
That was their second restaurant in that era.
Before that, she and Buddy were the last innkeepers of the old York Valley Inn, the 1700s stone building that sat along a busy Lincoln Highway… .

“Every time a truck would come by, I thought they were going to hit the building,” she said.
The Arcuris enjoyed their two years as the inn’s operators.
They lived in an apartment above the first-floor restaurant and bar. Hand-hewn timbers supported the roof, and wide boards formed the attic and upstairs floors.
In the cellar, a 2-foot-by-2-foot opening allowed visitors to peer into another room, adding to the legend that the stone house served as a stop on the Underground Railroad.
Cameron Mitchell, a York County native, visited the restaurant. So did actors Doug McClure and Nick Adams.
But there were all those vehicles rumbling by just outside.
“You thought they were coming into the building,” Mary said.
Engineers looked at the problem. Either the road or the house had to move.
The road won, and the Arcuris, operating on a month-to-month lease with owner Pennsylvania Railroad, left the York Valley Inn in 1962 and to operate The Carousel Room, later Liborio’s East, in the York County Shopping Center.
When people found out the old building was coming down, they stopped by for a piece of it as a souvenir.
“They even wanted the toilet,” Buddy said.
The old building was dismantled and parts of it ended up as the cemetery office in Susquehanna Memorial Gardens.
Mary said she never has been the York Township Cemetery to see the replica.
“That’s the way things are,” she said of the old inn. “You can’t be here forever.”
To see a numbered key to other landmarks in the photo above, see: Just try to resist studying this memory-tugging Sears photograph.
To see the York Valley Inn from the air, see: Just try to resist this memory-tugging aerial photograph of York Whitehull Airport and York Valley Inn and Playland and …
>em>To see a ground-level drawing of the old inn, click here.