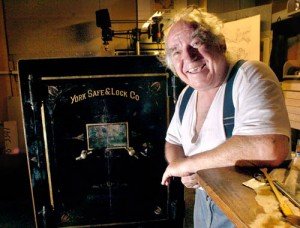 York, Pa.’s artisan Othmar Carli shows off latest restoration project, a 5,000 pound steel safe. Background posts: The bomb: ‘And yet it stopped the war’, Noted photo archive captures York County treasures, Women’s Club of York (another Carli project): ‘No one knew it really looked like this’ and Othmar Carli: ‘Restoration is much better than selling shoes to make a living’.
Was it worth $10,000 to restore a York Safe & Lock-made box to vintage condition?
York County invested that much in its Recorder of Deeds safe. Well-known historical restorationist and York resident Othmar Carli and two others did the work.
The short answer is yes… .

York Safe & Lock is an icon from York County’s past. The company and its owner Forry Laucks pioneered the York Plan, the pooling of skilled workers and machines to land massive World War II defense contracts. (Visit York Safe & Lock faltered after owner’s death.)
His estate is in the news almost daily, as the fight over scenic Lauxmont Farms continues.
That safe is part of York County. It was restored by county artisans. It will remain a point of pride to countless visitors to the Recorder’s office, where it is proudly displayed. Fifty years from now, the decision to restore the safe will be seen as farsighted.
“A project like this comes around once in a lifetime,” Carli said. High praise from the master restorationist.
A York Daily Record story on the restoration process follows:

York County is paying about $10,000 to restore a 5,000-pound, double-door steel safe that has been a fixture in the Recorder of Deeds office longer than anyone can remember.
Employees secure important contracts, equipment keys, and other items in the 5-by-3-by-2-foot safe, but it was its historical rather than functional value that prompted Recorder of Deeds Randi Reisinger to request approval for its restoration.
“It was made for the county by the (now-defunct) York Safe & Lock Co.,” Reisinger said. “I’m sure it was a very big investment that long ago.”
Delicate detailing in oil paint and shell gold on the inside of the outer doors and the outside of the inner doors made Reisinger wonder whether similar artwork might not cover the box’s exterior, obscured by layers of paint.
Until her office moved from the old courthouse and into temporary quarters in the Bon-Ton building downtown, all she could do was wonder. The move meant the safe had to go somewhere during renovations to the old courthouse.
Reisinger asked commissioners for permission to restore it with money from the office’s records management fund — a pot of cash saved from deed- and mortgage-recording fees mandated by law in the 1990s and intended for improvements to the office’s record-keeping systems.
“It’s a lot of money,” Reisinger said of the cost. “But the nice thing is that it didn’t have to come out of the general fund of taxpayer money. We decided that, since we kept records of importance in there, we could use money from that (records management) fund for this.”
Since March, the safe has resided in the York garage of well-known historical restorationist Othmar Carli, who has spent hundreds of hours researching, scraping and repainting, together with his 28-year-old apprentice, Melissa Bruner.
“A project like this comes around once in a lifetime,” said Carli, who has been recognized by the state’s historical and museum commission for his work in the Adams County Courthouse, among other honors.
Bruner said thinning and scraping layers of paint from the safe and brushing it with mixtures of chemicals was tedious, time-consuming work that required more patience than the safe could ever hold.
“Then we couldn’t open it, so we were afraid we’d sealed it shut,” she said. “Turns out we were one number off.”
Reisinger plans to visit Carli’s studio Monday to see how the work is going and when she’ll be able to make the switch from a temporary safe back to the big, old one now that they’re back in the old courthouse.
“We have a spot (in our office) waiting for it that’s more out front so people can see how beautiful it really is,” she said. “This is something I felt we could contribute, something that the county will always have for others to see and use.”