York Safe & Lock: If you have a locked safe, how do you get it open? 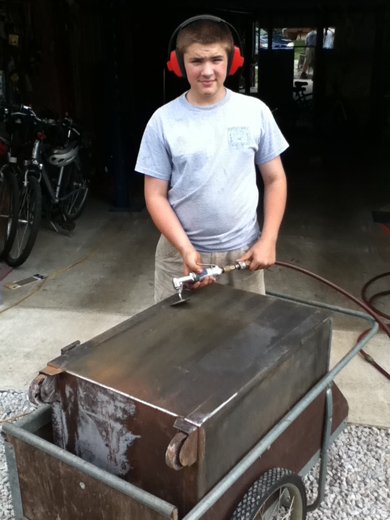 Fred Beihl of Stewartstown is an auctioneer, licensed appraiser and coin dealer. And his son Eddie, pictured here, has picked up his father’s interests. Here 14-year-old son Eddie works on an old York safe. ‘He removes rust and uses pneumatic grinders and sandblasting tools in the restoration process. The money earned is put towards his college education,’ Fred wrote, with a notation that his son had removed his goggles. Also of interest: All York Safe and Lock posts from the start.

Fred Beihl kindly gave great insight about York Safe and Lock’s products in the yorktownsquare.com post:  York Safe & Lock: How can I find information on my York-made safe?

Now he returned to answer two of the most often asked York Safe & Lock questions:

1. If someone has a locked York Safe & Lock safe, how do they get it open? 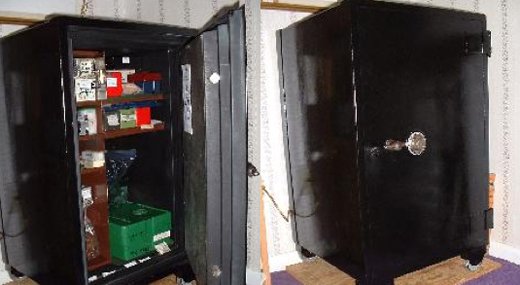 A restored York Safe, courtesy of the Beihls’ handiwork.

Fred’s response – If locked with door closed. This is not good. With a combination that you believe is good you should try the many combination opening sequences that are mentioned in this blog.

For most people without a combination a lock smith will be needed. The lock smith process involves trial and error manipulation or drilling and may avoid damage to the lock.
On thick steel walled safes drilled holes can be filled with steel ball bearings and epoxy. This repair makes re-drilling the same hole nearly impossible as the ball bearings just spin. Old York safes can not be repaired this way. A new sheet plate of steel may have to be used to patch the hole and insulated filler added. Both ways are expensive.

2. If someone has an open safe and simply doesn’t know the combination, how do they get it?
Fred’s response – The short answer: This depends on the type of lock. Just try to “SPY” the combination by removing the lock box cover plate. Spy at the plate notches as they spin and line up to the lever by turning the dial. The drive wheel “gate” notch will be the last number, you’ll hear and see the click! Now turn dial to throw open the bolt. Replace the cover plate. KEEP THE SAFE DOOR OPEN! Try the combination several times.

The long answer – On old York locks: Remove the silver chrome or nickel plated cover plate screw. This allows you to screw out the entire lock. Use brake clean spray to clean the lock parts.. Use lock graphite not oil or grease to lubricate.
Notice the numbered gears and the number for each combination disc or plate. Put the lock back in place. Try the combination using the numbers you saw on the brass plates. These plates snap out and the inner gear turns to change the combination. The brass plates look like a watch face with the indexed numbers. Snap the two inner and outer gear plates or discs together. You have new numbers! KEEP THE SAFE DOOR OPEN. DO NOT CLOSE THE SAFE DOOR. Try the new combination three times before closing the door.

New locks that use the allen wrench looking change keys.
This type of lock is more modern. Try to “SPY” the combination. With the lock’s cover plate removed you can “SPY” with your eye the line up of the notches in the tumblers or plates as you turn the dial. Notice the “Drive Wheel” as you come to the last number your drive wheel gate (notched opening) will catch the lever and click thus sliding open the lock’s bolt! Now align the holes for the changing key to the cover plate port (hole opening).
REPLACE the cover plate. Insert the change key. It should fit into all the holes of the plates.

Use the change key to re-set the combination. With the lock box cover plate secure insert the key into the hole. Turn the change key in the proper direction- left or right depending on lock box mounting position. This process uses the Dial’s 11:00 index notch to set the combination and the 12:00 index notch to open the lock. If you know the old combination you may also use the opening index on the dial. Keep the safe door OPEN and redial the combination this time using the 11:00 CHANGING INDEX on the dial. Now insert the proper change key and change the combination. You’ll have to pass the first number two or three times to the second number and so on . Each lock may be different. You’ll have to experiment or follow the directions on the S& G instructions elsewhere in this blog. KEEP THE SAFE DOOR OPEN! Only close it after several good openings of your new combination.
Most owners will not have the change key. Again a lock smith will be needed, Not all keys are the same. Yale Lock change keys are smaller than Sargent & Greenleaf change keys. The wrong key may cause damage. You might get a change key from a lock smith to save money changing the combination by yourself. NOTE: New locks come with change keys!
Please read the instructions given by Sargent and Greenleaf in this blog. 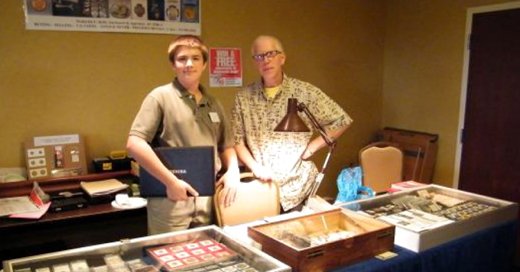 Eddie Beihl shares his father’s interest in coins, too. Here he joins Fred Beihl at the Shrewsbury Coin Show. ‘BTW,’ the proud father wrote, ‘Eddie is a volunteer at the Stewartstown library, and was mentioned in the YDR for his National competition in Handbells. Along with his ensemble Trinity Bells he was awarded 1st place in the nation in Louisville Kentucky this past summer.’