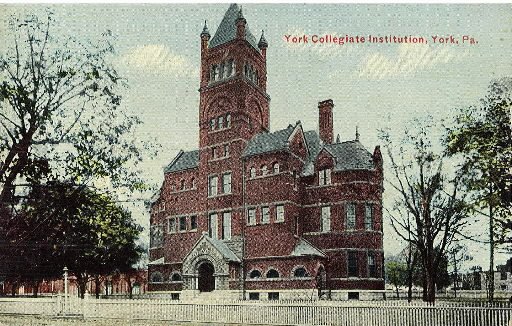 Campus Park,sitting on the former footprint of York Collegiate Institute, is one of 24 city parks. It takes its name from the collegiate institute, a forerunner of York College, that occupied the South Duke Street and College Avenue site until 1962. Voni B. Grimes Gym sits next door, formerly the school’s gymnasium. College Avenue takes its name from the collegiate institute. Background posts: Richard Nixon’s visit to his namesake park sparks memories, Growing off-peak trolley ridership: Build a park and Great Balls of Fire, Memorial Park to spin back to 50s.

The York Daily Record/Sunday News has published a neat Web map with informational windows showing York’s 23 parks.
It even includes the city’s developing park – Renaissance Park, the city’s 24th park – at the corner of East Princess and Prospect streets in the Old Towne East neighborhood.
The following is a story accompanying the map telling about the new park, developed as part of the YWCA’s Community Renaissance program :

Kids in the Olde Towne East neighborhood keep asking Greg Clayton the same question about Renaissance Park.
“When’s it opening? When’s it opening?” said Clayton, the neighborhood association president.
They’ll have to wait a few more months. City officials expect York’s newest park to open in July.
Clayton thinks the park will have a positive effect on the neighborhood.
“Most of us don’t even have backyards,” he said. “My backyard’s 12 feet by 10 feet.”
Renaissance Park is one of a few new things park visitors will see in the city this summer. It’s part of the YWCA’s Community Renaissance program, funded with state Elm Street dollars.
The name of the project and the park are reflective of the goal: a rebirth of the neighborhood, said Jane Conover, assistant executive director of the YWCA.
Planners asked neighborhood residents what they needed, and the answer was a safe place for children to play, she said.
The new park will be nestled into the corner of East Princess and Prospect streets, behind the York Spanish American Center building.
“This site came up because there was a concentration of burned-out, empty, blighted buildings,” she said. “The buildings were pretty much beyond repair.”
Plus, the YWCA has signed a contract to purchase the Spanish American Center building, she said, so it will be easy for staff to keep an eye on the park.
The new park will have basketball courts, slides, swings, checkerboard tables, a pavilion and a plaza area with a stage. The park’s design includes a turnaround spot at the end of Prospect Street, where people will be able to drop off and pick up children.
“We’re actually contemplating on maybe showing a movie or two during the summer,” Clayton said.
Renaissance Park is a “pocket park,” said Tom Landis, the city’s superintendent of parks, recreation and sanitation. It’s small and neighborhood-aimed.
The new park will feature public art, he said.
“You won’t find a lot of art in our other parks,” Landis said.
Another nearby pocket park will look like new this summer.
A makeover of Foundry Park is nearly complete.
“That obviously (was) a pocket park in deplorable shape,” Landis said. “Now it’s absolutely beautiful.”
Previously, hard rains caused mud to flood from the Codorus Creek onto the stage at the plaza. The boat ramp was covered in muck and litter.
The stage and ramp have been raised to prevent flooding. The hill leading to the basin was landscaped, concrete steps were replaced and a new red bench lines the top of the hill.
Ten-foot-tall flowers made of industrial parts were planted along Philadelphia Street to draw visitors in.
Keeping parks clean
Jim Gross, the city’s public works director, said trash is picked up twice each week in every park. Keep York Beautiful and neighborhood associations often have park clean-up days as well, he said.
Through the “Angels in the Park” program, businesses or community groups can adopt parks and develop a plan to improve them, whether it’s by cleaning up or doing some other work. There are still a few parks available for angels, he said.
“Obviously (litter) is an issue throughout the city,” Gross said. But the parks have trash receptacles for a reason. “We encourage everyone not to litter.”
This summer, the parks could see a little more regular patrolling. Last year, city council members approved spending almost $64,000 for a park ranger program.
Landis said the program is still in the beginning stages.
Right now, the city relies on police to check on the parks during regular patrols, Landis said. But police are usually busy handling calls, which limits their time, he said.
Rangers would check on people who get permits to use the parks, as well as make sure the parks’ hours are enforced, he said.
“The parks do close at 10 p.m.,” he said.
City officials are still determining how the program will be staffed, he said.
Gross said the program might be staffed through city police on overtime. He’d like them to be on hand for scheduled events, such as the regular movie series at Kiwanis Lake.
“We’re going to kind of see how it works for this summer,” he said.