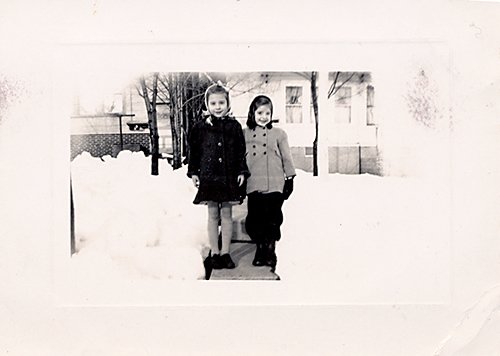 York, Pa.’s, Nancy L. (Downs) Roth submitted this photo of a large snow from when she was a child in Red Lion. Camille Taylor, left and Nancy are standing in snow about half their heights at the rear of 328 North Main Street, Red Lion in 1946. ‘I don’t know how much snow there was but do remember several large snow falls when I was a child,’ she wrote. Nancy is echoing a common believe that snowstorms decades ago were worse than today. These come despite inundations from Nemo in the Northeast last week ( see Nemo time lapse photographs below) and the York County blizzards of 1993, 1996 and even 2010. Maybe you need the vantage point of history to understand whether southcentral Pennsylvania winter weather is changing. Also of interest: For years, York countians have eyed amazing, destructive Susquehanna River ice jams and All bad weather posts from the start.

The other day, The National Park Service sent out a newsletter profiling Nicodemus, Kan.

What puts that town of the map?

“In Nicodemus, Kansas, there are no mountains, oceans, or canyons. Nicodemus was not a great battlefield, it holds no renowned architecture, and none of our presidents was born here. Were one to consider it only for its physical attributes, Nicodemus might seem entirely unremarkable.

“Yet as the first and only remaining black settlement in the West, Nicodemus is very remarkable.”

Closer to home: York College’s Peter Levy will speak at Crispus Attucks Community Center on “York: Riots and Rebirth” at 2 p.m., Feb. 24. For details about those tumultuous times, check out: Where do you go for the best source about the York race riots and trials?

The program is part of the organization’s Black History Month lecture series.

Forum of the day: The HoodiePillow’s appearance on TV’s ‘Shark Tank’ was No. 1 on ydr.com’s most viewed list. Some people aren’t inclined to buy this locally made ‘cocoonification’ contraption, but would you use this pillow case with a draw string if someone gave you one? Comment below please. Background: Check out all these inventors, scientists, with York County roots.

This is just interesting. Check out this time lapse from last weekend’s Blizzard Nemo. The weekend weather is not bad, but winter isn’t over yet. Remember Snowmageddon 2010?

Snow or no snow: The Great Backyard Bird Count, the Super Bowl for bird watchers, kicks off this weekend. Do you enjoy bird watching or are you too impatient for their quiet hobby? Comment below. Background: York County’s top bird watcher: Henry L. Yeagley.