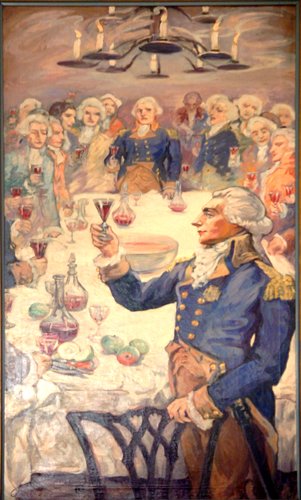 This painting shows Marquis de Lafayette toasting George Washington, a longtime fixture in the old Lafayette Club in York, Pa. The impact of this toast is controverted. Some students of history say it tipped the scales in favor of the retention of Gen. George Washington as commander in chief of the Continental Army in the American Revolution. Others say that the bid by Gen. Horatio Gates to take over the Army had already lost steam. That’s just the start of controversies over this moment in early 1778 when the Continental Congress was meeting in York. Marquis de Lafayette captivates people even today.

In that post on his now-inactive Windows Into York blog, Scott takes a poke at several parts of the Marquis de Lafayette/Horatio Gates story. That story – a cherished part of York County’s past – tells about the marquis’ toast in the Gates House in support of his friend George Washington. With that nod, backers of Gates could see that Lafayette – with his connections to potential ally France – was a unwavering supporter of Washington.

As for me, I believe the toast took place but stand in the camp that Gates’ star – high from his victory at Saratoga, N.Y. – had already started to fall and the so-called Conway Cabal was fizzling even before Lafayette was in York in early 1778.

An very interesting part of Scott’s work is to probe the venue for the toast. He questions whether it, indeed, occurred in the Gates House, today a local historical site operated by the York County Heritage Trust.

“Several years ago I extensively researched the alleged ‘Toast that Saved the Nation’ — General Lafayette’s legendary toast to the health of General George Washington at the Gates House in York. This toast is promoted as an event that thwarted the Conway Cabal and saved Washington’s job. Today, we even have a statue of Lafayette standing in front of the Gates House and a historic marker commemorating the event.
“But is any of it really true? Did Lafayette actually give a toast? If so, did it save Washington’s job? And did it really happen in the Gates House?
+++
“Turns out, the toast is mostly just boast, with little factual evidence. I wrote about the event in a York Sunday News / York Daily Record guest column, which appears below:”

Now that the community has celebrated the unveiling of a statue commemorating the Marquis de Lafayette’s toast to Gen. George Washington, it is probably a good time to separate the legend from historical fact.
Local tradition holds that Lafayette was invited by the Board of War to come to York Town, then hosting the Second Continental Congress, in order to accept a commission to lead a Continental Army invasion of Canada. The board was filled with Washington’s enemies, and their ultimate goal was to replace the commander-in-chief with Gen. Horatio Gates. Perhaps they could even woo Lafayette to support their cabal.
Gen. Gates hosted a banquet at his house, and here Lafayette sat as board members and congressional delegates toasted one another. Much to the conspirators’ dismay, however, Lafayette proposed a toast to Washington. This brave deed reinforced Lafayette’s steadfast support of the general, ultimately thwarting the Conway Cabal and saving Washington’s job. Without Lafayette’s support, the French government would not support a change in leadership. The young nation was coveting the support of France to help defeat the British Army.
This is the oft-told story of Lafayette’s 1778 visit to York Town. But is there really historical evidence to support this claim?

Lafayette is the only source for the toast, and the first reference to it appeared in an 1829 interview with historian Jared Sparks. A second reference occurred in 1837 with the posthumous release of Lafayette’s memoirs, almost 60 years after the alleged event. All Lafayette actually claimed was that he “embarrassed them by making them drink to the health of their commander in chief.”
Lafayette did, in fact, meet with the Board of War on Jan. 31, 1778, the same day he submitted a lengthy letter to the Continental Congress outlining his requirements for accepting the appointment. The meeting with the board was held in York, and Lafayette himself wrote about it in a letter penned immediately afterward. He makes no mention of a dinner, banquet, toast or location. He does inform President Henry Laurens that he made several demands upon the Board of War, and his acceptance of the commission was contingent upon their acquiescing to his demands. If his demands were not granted, he would return home to France “with most all the French officers in the Army.”
Lafayette gives an attendance list of those at the meeting, and states that only one person, delegate William Duer, was against him. According to the marquis, Gates didn’t have much of a reaction, describing his response as “the old fellow scretching his wig.” In fact, Lafayette describes Washington’s opponents merely as “two or three rascals.”
Lafayette’s letter is the only contemporary first-person account of the meeting, and it bears little resemblance to the famous “Toast that Saved the Nation” story. One can trace the growth of the toast mythology through local histories, beginning in the late 19th century. With each subsequent retelling, the legend seems to grow.
In 1876, the toast was briefly mentioned in a local history book, but by 1907 it had apparently saved Washington’s job.
In a 1927 publication, Lafayette actually toasts “the end of the Conway Cabal,” and 23 years later Lafayette is portrayed as slamming his glass against the wall after the toast. Even a 1965 student publication refers to the event as an “immortal toast.”
It is also important to note that there is no historic evidence to support the popular assertion that the meeting between Lafayette and the Board of War actually took place at the Gates House on West Market Street. Lafayette’s memoirs do state that the toast took place at “Gates’ own quarters.”
However, the Board of War, over which Gates presided, made their headquarters in the law office of James Smith on South George Street, across from Christ Lutheran Church.
Two days after the meeting with Lafayette, Gen. Gates submitted a letter to Congress, stating that “Every endeavor to procure quarters has been attempted in vain.” Nine days later, Congress agreed to reimburse Gates for his public lodging costs. So Horatio Gates most likely moved into the building that bears his name after Lafayette’s brief visit to York. At that time, the “Gates House” was a rental property, and hadn’t been part of a tavern since about 1771. The general was, however, living in “a disagreeable tavern” on Feb. 2, according to his letter to Congress.
Lafayette’s visit to York is an intriguing piece of history, especially when told within the context of the “Winter of Discontent.” And while we celebrate his time in York, let us raise a glass to a factually supported toast that the Marquis gave during a visit in 1825: “To the seat of the American Union in our most gloomy times – may its citizens enjoy, in the same proportion, their share of American prosperity.”

What do you think?
Thoughts on the assessment here about the Gates House and the toast? Please comment below.

Continental Congress struggled into York, and delegates strutted back to Philly 9 months later.