York, Pa.’s, skyline: Where was the photographer standing to get this one?

York, Pa., Daily Record photographers has been capturing some interesting outdoor photographs of high school sports all-star groups. This photo came from a different photo session, providing the cover of the basketball preview tab. We’re presenting it here because this photograph is outstanding, literally, and this compelling setting, with those historic buildings in the background. So, let’s test your downtown York, Pa. What are the tall buildings at left, center and right? Also, where are the players and photographer, Kate Penn, standing? Answer below: York, Pa.’s, snowy Continental Square from on high: How did the photographer get this picture? 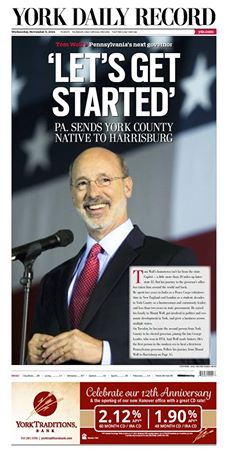 That was atop the story and photo about native son Tom Wolf’s win as Pennsylvania’s governor. In a column after the election, I wrote about our struggle to come up with just the right headline and asked readers to put forth their best headlines for that story. Two much-appreciated comments arrived. Fred Irvin wrote: “Must have been quite the post election party going on down at the YDR. “Lot’s good refreshments of all types and loads of laughs too. “Really, Howlin’ Wolf! (even though instantly rejected)” He respectfully declined to “take a shot” but said, “(T)hanks for the insight on what goes on in the rugged world of journalism.” Another reader came up with this idea: “The headline you requested is a natural: Clap for the …………… “Everyone in advertising knows that your mind will automatically fill in the ‘blank’ (‘Wolfman’, of course) ” He noted that a significant majority of people 45 to 75 will know that “hands-down.”

+++
Battlefield in the news: Work around the Gettysburg Battlefield is always interesting to folks. Here is some news involving Little Round Top.

+++
History Mystery: When you see a flat spot around rolling York County, chances are there’s some history to it.

*Answer from above: That’s the York County Courthouse (now county Administrative Center), left; Christ Lutheran’s steeple, middle; and the old Colonial Hotel on Continental Square, right. The photographers and players traveled up to the upper floor of the East Market Street Parking Garage to grab this scene.