York, Pa.’s, Laurel and Rex firehouse: ‘May it be preserved for all time’ 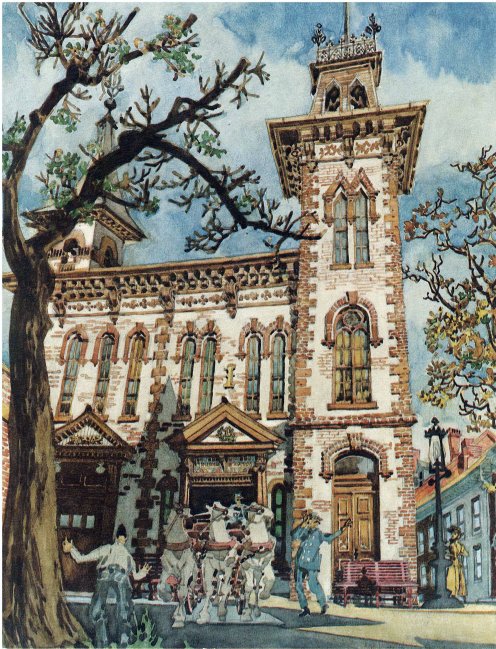 This has been a favorite York County, Pa., rendering for years, the Laurel and Rex fire house. I didn’t know it originally was commissioned as a Christmas card. Columnist Gordon Freireich brought that to light in a recent York Sunday News column. Howard Marshall Advertising commissioned the drawing by York artist Cliff Satterthwaite. Gordon’s column revealed the message inside the card:  ‘The Laurel And Rex Fire House is one of York’s genuine architectural treasures. May it be preserved for all time. We commissioned the painting by Clifford Satterthwaite to dramatize the uniqueness of the building’s design and style, and to recreate the excitement of olden days when the horses charged forth onto Duke Street.’ A couple of years ago, York fire officials eyed alternatives for the Laurel/Rex. But the move to a new city hall and renovation of the then-city hall into a police station came first. So, yes, may the Laurel and Rex be preserved for all time. Also of interest: York County readers report sightings of Cliff Satterthwaite’s paintings, drawings.

We’ve profiled several Facebook groups recently, those “You’re Probably from …” that are emerging as forces to preserve our communities. Well, here’s one to watch: You know you’re from York PA …. This, of course, is York centric.

Down in New Freedom, Cindy Sharp puts up this interesting question on “You’re Probably from New Freedom”:

“I have numerous items from the NF, Railroad, Shrewsbury area from the 1960-1980 years. They were collected by my mother, who was a lifelong resident of NF. I am not so much interested in selling them as I am giving them to someone who has a passion for these kinds of items. My email is sharp1966@comcast.net. I would be happy to send a list of the items.”

See the value of these groups?

Bad weather, of course: The recent snow and cold wave is not surprising. It’s Farm Show week, after all.

Happy 50th: Roundtop Mountain Resort in northern York County’s Warrington Township is observing 50 years in business this year. For much of it’s life, it was known as Ski Roundtop. Check out this anniversary video, too:

History mystery fun: Feel free to join in on this, initially posted on YDR’s Facebook page.