The question has come up before. How can a welcoming city tell westbound motorists on the old Lincoln Highway to ‘Do Not Enter.’ And it’s a good question. And it was raised by someone, York Sunday News columnist Gordon Freireich, who is a leader in an organization, York Rotary, who is doing something about York, Pa.’s, greetings to motorists. Rotary’s ‘Welcome to York’ monument greets motorists moving into York from the south. (See drawing below). 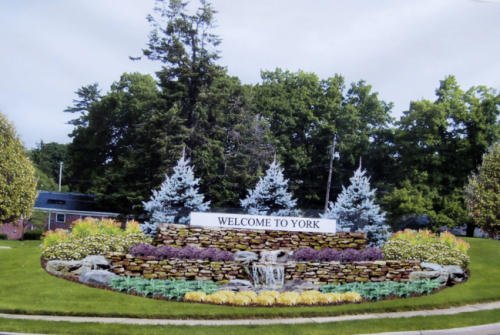 Rotary (with an assist from York Water Co. and York Hospital) is constructing this certain-to-be wonderfully designed welcome fountain as part of its 100th birthday festivities this year. In his column, Gordon surveys the west and north entrances to the city, as well.  He rightly laments the loss 15 years ago of the steel truss bridge crossing the Codorus Creek near Santander Stadium. A common concrete bridge crosses there today. And he aptly summed up that unwelcoming east approach with its ‘Welcome to York’ and ‘Do Not Enter’ signs with the statement: ‘Talk about mixed messages.’ Check out what’s on back of this ‘Welcome to York’ sign.
+++
York Rotary 100: A bit more about this century-old club, in History Mystery form

History Mystery: This is #YorkPa’s Rotary Club on an outing in rural York County in 1925. Can you ID this wonderful…

Historic York: A new blog on the block

Be sure to check out our new PreserVision blog, and tell your friends!… http://t.co/5tmm2fVNSC