York, Pa.’s, snowy Continental Square from on high: How did the photographer get this picture? 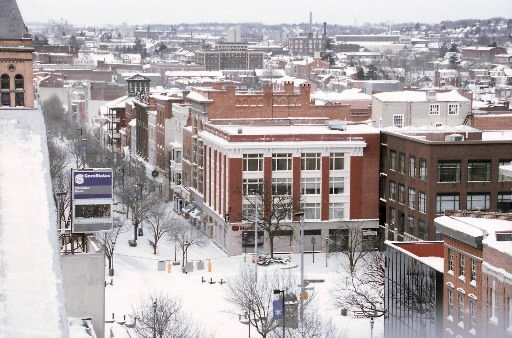 This photo by Paul Kuehnel was marked January 2008 in the York Daily Record/Sunday News archives, but this snowy scene was actually captured before that. York, Pa.’s, Wells Fargo Bank has long replaced CoreStates. But that’s a bunny trail in the snow. The real question here is the elevated point Paul Kuehnel was standing in making this photo of York’s Continental Square. (Answer is below.) Also of interest: When did the square in York change its name from Centre to Continental?

“Neon lights, Christmas decorations and fresh snow painted a pretty picture on Continental Square on Tuesday night — so pretty, it made me pull over and park for a few minutes to snap some photos,” she wrote.

Paxton Boys: To see Tweets from a conference about the Paxton Boys massacre of Lancaster County’s Conestoga Indians 250 years ago, see: #paxtonconf.

Historian passes away: Van Baker, well-known historian and long-time York County Heritage Trust volunteer, died this week. Please check out his obituary. Van was known in the community for a lot of thing, including his book about the Mexican-American War “The Websters.”

Don’t miss this booksigning: Scott Mingus and I will sign books at Irvin’s Books this week. This will be our only pre-Christmas signing. Details: Echoing Still: More Civil War Voices from York County, Pa.

Join the conversation: I urged an friend, a student of local history, to become part of a YDR Facebook discussion, sometimes called a thread, such as that below. And I would urge you to do the same  when I post them on FB twice a day on this site which will soon reach 25,000 fans. Here was my encouragement to him: “You should always feel free yourself to get into a thread and add detail to enlighten or just coax along. Coming from you, people would really respond. I often do that to tease out info. All in the interest of engaging people and promoting local history. I find on FB that everyday people are on there so it’s an opportunity to pull people in who might not ordinarily think about history.”

*Paul was standing in a stairway in the Yorktowne Hotel. He explained that the stairwells on that side of the hotel have windows.