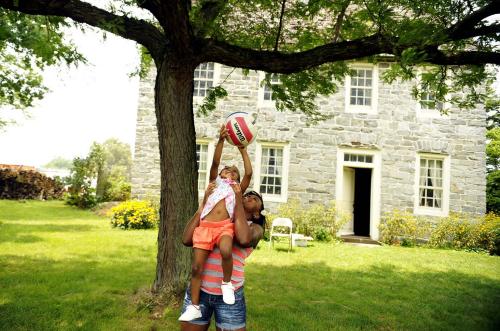 Ydr.com’s Chris Dunn made this wonderful, memorable photograph from the Codorus Street Reunion in York, Pa., the other day. But there’s more content here than just two young people playing. That’s the Cookes House in the background, home of super patriot Thomas Paine, fighter for America’s independence. The house sits next to a park named after another fighter for liberty – Martin Luther King Jr. The reunion represented a coming together of far-flung families, many with common roots in Bamberg, S.C.  and with slaves in their family trees. The younger of  the two in this photo, Trinity Young, came from Yuma, Ariz., to see where her great-great-great-grandparents lived from 1927 to 1961 – across the street from the Cookes House. (Kayla Sherrod, 15, of North Carolina, is Trinity’s friend in the photo.) Yes, a lot is going on this is photo. Also of interest:  Codorus Street Reunion packed with history, meaning.

The dollar store model is popular, an inflated version of the old 5 & dime.

At last count, York County has 33 such dollar stories with a 34th one going up in Wellsville. Pennsylvania is No. 6 in the nation in such stories, which are increasingly selling milk, bread, frozen meat and other consumable products.

For more on this interesting trend in York County and elsewhere, check out: Dollar stores.

Fisher farm: A church is looking to build someday on the former Fisher farm in West Manchester Township off Kenneth Road. Interesting, as you drive by, you can see a flurry of activity behind the thick woods. It was hard to tell what was going on back there, but now we know thanks to a ydr.com story.

Paul and Merian Fisher died a day apart in 2011, leaving behind interesting artifacts –  a 1940 Buick, a 1950s Columbia bicycle, pickling crocks made by Pfaltzgraff and other potters from the early 1900s, brittle leather horse harnesses from the late 1800s. For more:  Calvary Assembly of God.

Small towns in Pennsylvania and Maryland offer interesting day sites to see. Many offer coffee shops – relaxed places to sit, sip and check out the laptop.