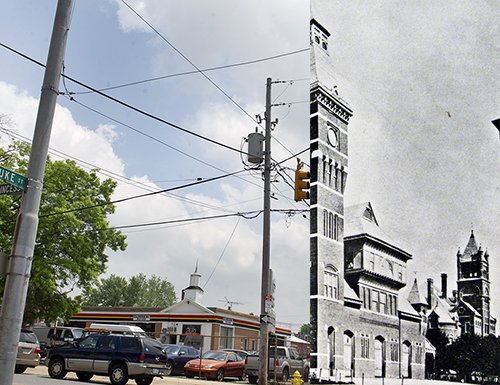 ‘Picturing History,’ captures the old York City Market, then and now. The Princess & Duke Street covered markethouse was the grandest of them all – even more than the still-standing Central Market. But it came down, as did many architecturally significant York, Pa., buildings in the demolition boom of the 1960s and 1970s. Many wonderful buildings coming down in those days made way for parking lots or gas stations. The sprawling City Market provided space for both. One can only wonder what that block would be like today if the market and its sister Dempwolf building along Duke Street, the York Collegiate Institute, had remained standing. Check out this special slider to see the best view of ‘Picturing History’s’ before and after. Also of interest: Old Children’s Home of York another example of unleashed wrecker’s ball in 1960s era.

Yorkblogger June Lloyd, writing about the ‘Final Days of York City Market,’ indicates that the old market protested its demolition in 1963.

She quotes a story from The Gazette and Daily:

“The top of the 80-foot-high tower of the old City market accidentally fell into Duke Street at 11 a.m. yesterday during demolition of the building. The brick section fell with a crash causing a big cloud of brown dust. It knocked out electric lines, broke a utility and light pole, bent two parking meter standards and disrupted traffic signals at Duke Street intersections with College Avenue and South Street. No one was injured.”

Love these lists? – The Virginia Association of Museums has put forth a call to museums, historic sites, etc., in Virginia and Washington, D.C., to nominate items for Virginia’s Top 10 Endangered Artifacts.  Check out last year’s nominees: Endangered.

Fulton history: Leslie Stainton is author of ‘Staging Ground: An American Theatre and Its Ghosts.’   It’s new history of the Fulton Theatre in Lancaster. Penn State Press produced this work. 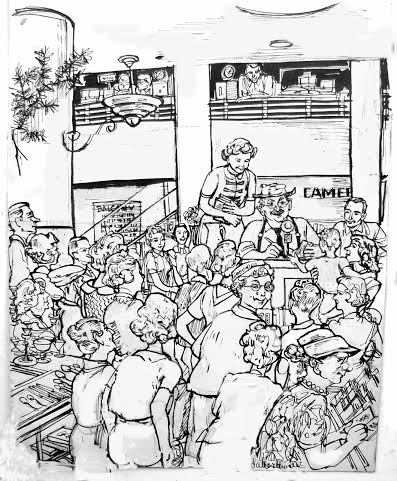 Cliff Satterthwaite captured another Cliff, as in Cliff Arquette, aka Charlie Weaver, signing his book at Bear’s. ‘Should-a got a copy,’ he wrote.

History mystery: Thousands of viewers engaged with this one. Feel free to join in by clicking the likes, comments and shares.