York, Pa., meets William C. Goodridge, former slave and successful businessman, returning from the past: Linked in to history, 5/6/13 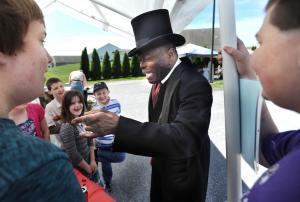 Robert Brinson, a reenactor portraying William C. Goodridge, played the role of the 19th-century former slave and businessman in the Gettysburg Sesquicentennial Remembrance Day event in Manchester Township over the weekend. The event, sponsored by Good News Jail & Prison Ministry, was an early observance of the 150th anniversary of the Battle of Gettysburg and the Confederate invasion of York County. Many more to come. For years, Wm. Lee Smallwood played Goodridge. Longtime reenactor Lee Smallwood no longer resides in this area, so it’s a wonderful thing that the life and times of the remarkable William Goodridge will continue to be portrayed. For more about the event, see: Civil War Comes to York County. Also of interest: William C. Goodridge: ‘One of the coolest guys you’d ever want to learn about’.

Architectural historian Scott Butcher gave a talk last week about some of the treasures that have come down recently and in the past.

He effectively flagged one treasure that might have been overlooked in recent months.

With the auctioning of the Lafayette Club, what will become of the colorful murals inside the historic building.

Here’s a sample of those murals: 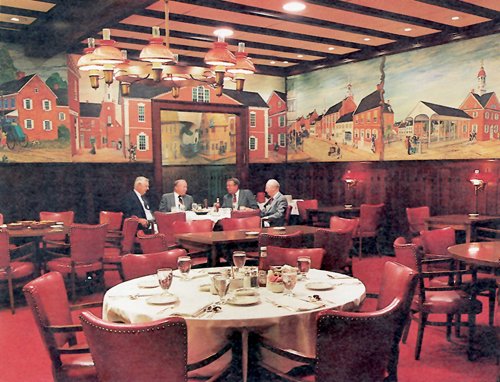 The Lafayette Club’s interior, with its murals, courtesy of the now-defunct organization’s 85th anniversary booklet.

Gettysburg 150: Gettysburg Concordance has released an interactive digital reference to the Battle of Gettysburg.

“Follow every regiment, brigade, division, corps, and army across the campaign area and battlefields in the month leading up to the Battle of Gettysburg, the historic battle itself, and the subsequent retreat,” a news release states.

The guides can be downloaded at the Apple app store.
+++

Loganville Fire Chief Rodney Miller died in the line of duty recently. This video captures a remembrance event honoring the chief last week. Five known police officers and two known firefighters have died in York/Adams since 1929, according to this ydr.com story: Organization works to prevent fallen firefighter numbers from rising.