York, Pa., had a famous V-J Day kissing scene, too 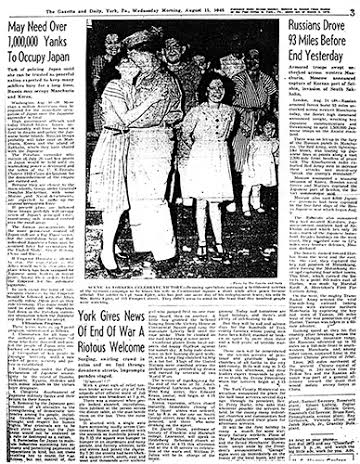 You’ve all seen the photo of the famous V-J Day kiss in New York City (see below). Well, York County, Pa., scored its own such kiss that evening as well, as shown in this photo from The Gazette and Daily. Also of interest: Perhaps the last (from York County) in (World) War (II) …

V-J Day brought people celebrating the end of World War II to squares around the world – and, of course, York County.

Thousands assembled there and hundreds observed a major event that evening in August 1945.

York had a famous kiss, too. Sam and Betty Epler embraced, as celebrators smiled and cheered.

“They didn’t seem to mind in the least that five hundred people were watching,” a caption for The Gazette and Daily’s photo of the famous kiss stated.

That moment came to mind upon news of the death of the sailor in the famous kissing scene outside the New York subway in Times Square.

That was photographer Alfred Eisenstaedt’s greatest shot, capturing the euphoria of the long war’s end.

Glenn McDuffie, the sailor, died recently at the age of 88.

The photographer didn’t get the names of either the sailor or the nurse, but both were identified years later.

Edith Shain died in 2010. Now McDuffie, certified to be the sailor in the photo by a forensic specialist, just passed away.

In case anyone will ever forget these famous kisses, June Lloyd has served up a reminder. She blogged about a 26-foot-high kissing scene similar to that on Times Square. And she provided a photo of the Sarasota, Fla., monument to prove it.

As for York’s Continental Square kissers, folks from around the community have told me  that they remember Sam and Betty Epler. So they’re not forgotten around here, either.

All all this should serve as a reminder that we must celebrate – and continue to observe – Memorial Day, Veterans Day and other moments that mark the service and sacrifice of our military heroes. 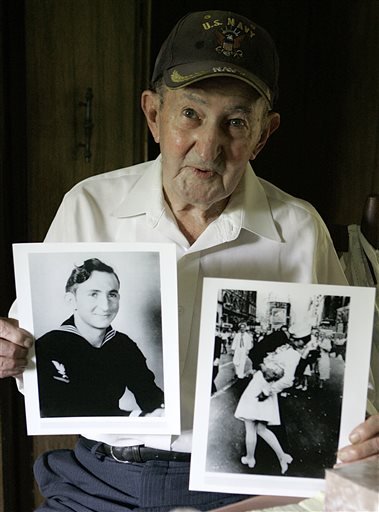 Glenn McDuffie, the obscure sailor in the famous photo, has passed away.

Check out these photos and stories about World War II in YorkTownSquare’s archives.