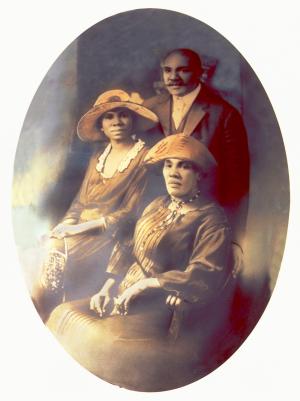 Ancestors of many York countians with Bamberg, S.C., roots pose for this photograph. They are seated on the left, Fannie Grayson; seated on the right, Josephine Grayson Nimmons; and Richard Grayson. Also of interest: Codorus Street Reunion packed with history, meaning.

Charles A. Orr is a York County native, who lives and works in Detroit.

Though living several states away, he never has forgotten his hometown.

And he has done much to document York’s connection with his family’s ancestral home, Bamberg, S.C., also several states away.

The Bamberg connection has been explored on this blog and in various newspaper articles in the past 15 years.

But Charles Orr pulled the threads together in a compelling narrative – Roots of York: The link to Bamberg, S.C. – that first ran in the York Sunday News (2/7/13) and now appears here:

“Isaac Nimmons was our father’s body servant and coachman, and a great favorite with all the children. He had been a stable boy of my grand uncle A.R. Govan, who imported the great race horse Bosters from England, and as a partner of Col. William Johnson of Virginia ran a number of horses on the Washington Race track at Charleston. Isaac was a born sport and knew the history of all the great races by heart, and being a good raconteur, endeared himself to the children of his many track anecdotes…” (Note: A.R. [Andrew Robison] Govan served in Congress from 1822-1827).

Union forces of Gen. William Tecumseh Sherman passed through what is now Bamberg County in February 1865. Plantations in the area were burned, including Simms’ 4,000-acre plantation, Woodlands. Nearby landowners accused Isaac Nimmons of instigating the other enslaved blacks to burn the plantation. William Gilmore Simms, Jr. reported what happened:

“Some time after the army had passed, a jury of citizens in the neighborhood arrested my father’s coachman and body servant Isaac Nimmons and tried him for the burning of Woodlands. The weight of the evidence exonerated Isaac, although there was a good deal of feeling against him, but general opinion was that the dwelling was burnt by some of the bands of bummers that hung on to the outskirts of the army. All the occupied houses of the neighborhood were burned during the stay of the army, among them the beautiful home of General D.F. (David Flavel) Jamison, the President of the Secession Convention…”

In July 1865, Freedmen’s Bureau agent, James C. Beecher (the brother of Harriett Beecher Stowe, author of “Uncle Tom’s Cabin”) gave Isaac Nimmons power of attorney to sign work contracts for 24 other freedmen and the authority to form a community. Between 1883 and 1890, Nimmons bought 514 acres of land and became a successful farmer in the Middle Place, a thriving African-American farming community. The Historical Society of Bamberg County chronicles his achievements in the book, “History of Bamberg County, South Carolina” (2003): “Nimmons purchased property, made loans, and sold farm products. When he died in 1900, he left a will leaving many acres of land and over two thousand dollars in cash to his children.”

His detailed, handwritten will signed on Aug. 22, 1900 declared: “I give and devise to my beloved children, Isaac Nimmons, William Nimmons, Joshua Nimmons, John Nimmons, Diana N. Reed, Emma N. Washington, the rest and residue of my estate both real and personal, in equal portions to each, and the same to be charged with the payment of all my just debts, including the mortgage debt due to F.M. Bamberg.” (Bamberg County was created from Barnwell County in 1897 and named for F.M. (Francis Marion) Bamberg).

Isaac and William were executors of their father’s will. In 1909, they sold 42 acres of land from his estate to their sister, Diana. After her first husband Aaron Reed died, Diana married the Rev. C. Nelson Odom. The Rev. Odom was the founder of York’s Bethlehem Baptist Church formed to serve the growing number of families from Bamberg.

After the senior Isaac Nimmons died, I.S. (Isaac Solomon) Nimmons (1852-1934), his eldest son and namesake, became the Nimmons patriarch. He attended Claflin University founded by Northern Methodists in 1869 to educate the children of former slaves. Claflin was the preferred institution of learning for Charleston’s black elite. Early generations of Nimmons scions, including I.S. Nimmons’s daughter, Eulamae – wife of Bamberg emigre, the Rev. David M. Orr, Sr., 20th-century York County entrepreneur and community leader – attended the renowned institution. The Nimmons clan’s respect for education was passed to their son, Henry Clayton Orr, who attended the storied Smallwood Elementary School, graduated from York High in 1942, served with distinction in World War II, earned a bachelor’s degree and a master’s degree from Howard University and a Ph.D. from George Washington University. He was listed in the “Who’s Who of American Scientists,” and several of his studies in virology were published in scientific journals.

I.S. Nimmons was an influential African-American leader and the respected head of Bamberg County’s Orange Grove community. As a Freemason, he was involved in community affairs and important events of the times. Like fellow Bamberg County native, Richard Carroll – who was offered the ambassador’s post in Liberia – Nimmons supported Woodrow Wilson for president and attended his inauguration. Relations between President Wilson and African-American leaders deteriorated after Wilson instituted racial segregation in federal departments. Black leaders confronted him in 1914 and told him, “Two years ago you were thought to be a second Abraham Lincoln.” Despite African-American opposition, Wilson continued to implement segregation in the federal government.

Nimmons’s farmstead, “Nimmons Place,” was legendary among the Bamberg diaspora in York. I.S. Nimmons and his brother, Joshua (Josh) Nimmons, owned and farmed upwards of 1,000 acres of land; attaining self-sufficiency and economic independence in spite of oppressive Jim Crow conditions. Josh Nimmons died in 1916, leaving a comfortable estate for his wife, Catherine, and their young children. With proceeds from her husband’s estate, Catherine became one of the first people in Bamberg County to own an electric car. Josh Nimmons, Jr. emigrated to York, where he and his wife, Sadell, lived for years and bought a home in the planned neighborhood of Fireside.

I.S. Nimmons’s wife, Josephine Grayson Nimmons (1866-1931), was of mixed African-American and Muskogee (Creek) Indian descent. The Creeks were one of the “Five Civilized Tribes.” They were resettled in the West in 1834 during the Trail of Tears, but remnant bands of them remained in South Carolina. The tribe sided with the Confederacy in the Civil War, and had to sign a treaty with the U.S. government in 1866 requiring them to emancipate their enslaved blacks and allow them membership in the tribe.

In 1928, Josephine came to York to care for an ailing daughter, Magethria, who along with her husband Aquilla Green, was among the first African-Americans from Bamberg to settle in York. The family temporarily returned to Bamberg where Magethria died. She was buried in the Nimmons family plot of the revered Orange Grove United Methodist Church. The church was founded by free blacks in 1864. It was destroyed during the wave of black church burnings across the South in the 1960s.When news reached York, black congregations raised money to rebuild the historic church.

I.S. Nimmons died a few years after Josephine. His obituary, appearing in Charleston’s largest newspaper, The News And Courier, read in part: “Isaac S. Nimmons, prosperous Negro of Bamberg County … owned 400 acres of good farm land, and never once did he allow a mortgage to be placed on his plantation. He farmed the land himself and was rated one of the county’s best farmers.”

I.S. Nimmons and Josephine had 14 children. During the Great Migrations of 1910-1930 and 1940-1970, the majority of their descendants made York their permanent home. Among them was Hammie Varn, York’s first African-American police officer.

These posts explore the Bamberg connection to York, Pa.