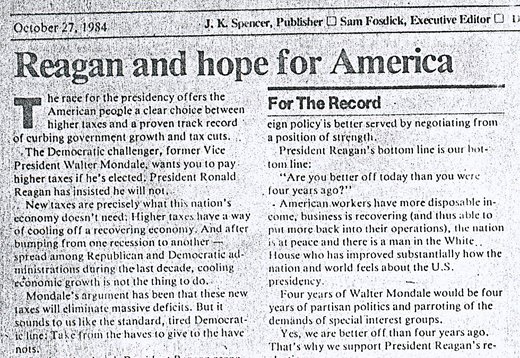 The York Daily Record’s endorsement of Ronald Reagan’s presidency in 1984 broke a string of Democratic presidential endorsements, or in the years immediately before the Reagan-Mondale election, no endorsements. Also of interest: Check out the All Politics is Local posts from the start and This working list details presidential visits to York and Adams counties.

With that, the York Daily Record concluded its endorsement editorial backing Ronald Reagan as U.S. president in 1984.

And with that, the YDR ended a reign of Democratic support of presidential candidates that started from the newspaper’s earliest days – in the late 1700s. Die York Gazette was anti-federalist, a movement that was a forerunner of the Democratic party.

Then came the Jeffersonian and Jacksonian politics of the South that worked its way across the Mason-Dixon Line to York County.

I used the word “worked” intentionally because the states rights government favored by the Dems also resonated with agricultural York County. Farmers here did not like taxes on the whiskey they distilled on their farms coming from a strong federal government and backed the looser monetary policies of the Dems.

So that Dem support came to full bloom in the 1860 and 1864 elections in which York countians gave the nod to Democratic candidates v. Abraham Lincoln. Indeed, in 1864, Democrat George McClellan scored a bigger margin of victory  over Lincoln than the Democrats gained in 1860. The York Gazette was the most influential Democratic newspaper in those years.

In 1915, J.W. Gitt  gained ownership of the Gazette and later introduced a brand of extreme liberalism that was, well, to the left of that assigned in later years to Teddy Kennedy.

The high point – or perhaps low point – of those Gitt years came in 1948 when Gitt’s Gazette and Daily did not even support a Democrat. Progressive Party candidate Henry Wallace was more to Gitt’s liking than Harry S. Truman.

As the well-known story goes, only two newspapers endorsed Wallace in 1948. The Gazette and Daily and another daily, The Daily Worker of Communist fame.

Interestingly, the competing York Dispatch was founded as a Republican organ. The weekly “True Democrat” in 1864 evolved into the daily York Dispatch. The newspaper was seen as a supporter of Republicans until it broke with that tradition with the endorsement of Bill Clinton in 1994.

Ten years before that, in 1984, the York Daily Record, successor to Gitt’s newspaper, faced this long Democrat tradition in addressing Reagan and Mondale.

After much deliberation, the newspaper went for Reagan.

You’ve seen its conclusion. The endorsement editorial began with this statement: “The race for the presidency offers the American people a clear choice between higher taxes and a proven track record of curbing government growth and tax cuts.”

So the YDR backed Reagan, reinforcing the conservative’s famous line: “Are you better off today than you were four years ago.?”

Indeed, when critics contend we’re a bunch of liberals out here, I usually ask them to square that statement with the fact that we’ve backed Republican presidential candidates over the years, starting with Ronald Reagan. That usually causes some pause.

In any given year, we endorse more Republicans than Democrats, when you figure all the state representative, U.S. Congress and county commissioner candidates that we’ve endorsed over the years.

We endorse for offices, high and low, in every election. We take all kinds of positions on our opinion pages. Why hold back on endorsements?

And we always offer the same qualification put forth by YDR executive editor Sam Fosdick in 1984, in a column that appeared just under the Reagan endorsement.

“Our intent, then, is to ask you to think about the candidates. Not to cram them down your throat.”

– In 2008, 8 top candidates or their families campaigned in York County

– Check out this chronology of Die York Gazette/York Gazette/Gazette and Daily/York Daily Record. See an extensive newspaper history on ydr.com/history.