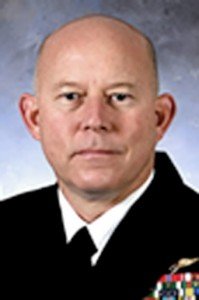 York County native Capt. Chip Miller will command the USS George H.W. Bush when it launches next year. He has since earned the rank of rear admiral. Background post: Gitmo second-in-command hails from York County .

York County has produced scores of high-ranking military officers in its history.
Four-star Gen. Jacob Loucks Devers was the highest ranking, commanding two armies – the 6th Army Group – in World War II.
Gen. William Franklin William Franklin headed a grand division – two corps – at the Battle of Fredericksburg in the Civil War.
Michael Small scored the rank of brigadier general in the Civil War.
Thomas Hartley served as a colonel in the Continental Army and a friend of George Washington.
Now comes news that Capt. Chip Miller will gain command of the Navy’s newest aircraft carrier – the USS George H.W. Bush, when goes into action next year… .

Not only will Miller head of the spanking new ship, but he got there after a long career as a fighter pilot.
“I was one of the weirdoes who knew exactly what I wanted to do at age 8,” Miller said. “I saw the Blue Angels flying at an air show in Annapolis and I knew I wanted to be a jet pilot.”
More on Miller from in a York Daily Record/Sunday News story (12/1/07):

Right now, Capt. Chip Miller has to concentrate on the matter at hand.
The York County native is preparing his ship, the USS Nashville, for a month-long deployment at sea in which the amphibious transport dock will engage in a series of war games.
Next year, Miller will lead the Nashville, with its crew of 400 sailors and up to 400 Marines, to the Persian Gulf region. He’s got responsibilities.
So he’s trying to forget about his recent news. A few weeks ago, Miller, 48, was told he would be named captain of one of the Navy’s 12 aircraft carriers. Friday morning, he learned his ship will be the USS George H.W. Bush, which is scheduled to be completed next year.
“You just have to take a deep breath and focus on the job you have,” Miller said Wednesday about his promotion. “But it is kind of a giddy feeling.”
The 26-year officer who lives in Norfolk, Va., is fulfilling a career dream.
Miller was in his state room on the Nashville when he took the call about his new command.
“I was all well and ready for the other call, the bad news call,” Miller said. “So when the good news came, I pretty much lost it. It was pretty overwhelming.”
After graduating from York Suburban High School in 1977, Miller chose the Naval Academy over the Air Force Academy.
Flying was his first love.
“I was one of the weirdoes who knew exactly what I wanted to do at age 8,” Miller said. “I saw the Blue Angels flying at an air show in Annapolis and I knew I wanted to be a jet pilot.”
He began his career as a fighter pilot, flying A-7s and then F/A-18s, and eventually became the executive officer of a fighter squadron in 1997.
Miller’s path to captaincy emerged in 1999, when he earned a master’s degree from the Industrial College of the Armed Forces. After working in the Pentagon’s office of legislative affairs and completing the Navy’s nuclear power training program, he served as executive officer of the USS Carl Vinson before taking over the Nashville.
Miller’s new command will tie together his whole career.
Before he steps up, Miller will have to renew his flight certification, so he can land a plane on his new flight deck.
“There’s going to be a bit of rust when I get back into the cockpit,” Miller said. “Flying high-powered aircraft off of an aircraft carrier is a dream come true.”
Reach Jeff Frantz at 771-2062 or jfrantz@ydr.com.
The Ship
USS George H. W. Bush
· Unit Cost: About $4.5 billion.
· Propulsion: Two nuclear reactors, four shafts.
· Length: 1,092 feet
· Beam: 134 feet
· Flight Deck Width: 252 feet
· Displacement: About 97,000 tons full load
· Speed: 30 knots (34.5-plus miles per hour)
· Crew: Ship’s company of 3,200 plus an air wing of 2,480.
· Aircraft: 85
– Source: U.S. Navy