York County landmark Elmwood Mansion: ‘Do you know where the house originally stood?’

The late Jeffrey Bortner, prominent York County (Pa.) attorney sketched this layout of the Elmwood farm in Spring Garden Township. His parents rented the miller’s house at Elmwood and Jeffrey Bortner grew up there before entering the service in World War II. The sketch, courtesy of Ann Small Niess, is circa the 1940s. Also of interest: Many national stars first performed on YLT’s stage and York’s Elmwood Mansion book more than history of a house and Stand-in stole show in YLT’s “Inherit the Wind”.

A common question posed about the Elmwood Mansion links to its location before it was moved in 1905.
Julie Aiken, managing director of the nearby York Little Theatre, most recently asked that question after reading about the local landmark and the remarkable fete of moving a housing of that size 800 feet.
The short response about its original location:

It’s not clear, but oral tradition has it in or around the site of present-day Memorial Hospital. Ann Small Niess’s booklet “Elmwood House,” says its original location was two and one-half blocks south of its current location at the corner of Belmont Street and Elmwood Boulevard.
I don’t know if Jeff Bortner’s drawing clarifies its location, but drawing conclusions is complicated because much of the terrain has changed with the construction of Interstate 83 in the 1950s.
Perhaps further research will show its original site, in the same way that the house’s move in 1905 was recently confirmed by the work of Ann Small Niess.
Here is Julie Aiken’s e-mail:

“I wonder if you know where the Elmwood Mansion stood before it moved to its present location. You mentioned 800 feet, I believe, in your recent article. I’m thinking that’s about 3 football fields. From which direction?
“I have a lot of Elmwood in my history! My mother lived in Elmwood at 3 periods in her life, including in another stately old Elmwood home at 105 Elmwood Blvd. for about 7 years when I was a child (after the Bankensteins, I think). My brother actually lived in the Elmwood Mansion for a few years. He is close friends with Steve Strickler, one of the Small family, I believe. Shortly before it was sold to Memorial Hospital Steve and a few of his friends lived there and tried to fix it up.
“Anyway, of course my brother had experiences with the ghosts. Now that I work at YLT we have several ghost stories, as well. It occurred to me that if the Elmwood Mansion originally stood where YLT now is, just north along the creek, there might be a synergy to our ghostly histories.
“Do you know where the house originally stood?”

When I responded about its presumed location in the neighborhood of Memorial Hospital, Julie responded:

“I guess YLT has its own ghosts with no connection to the Mansion!” 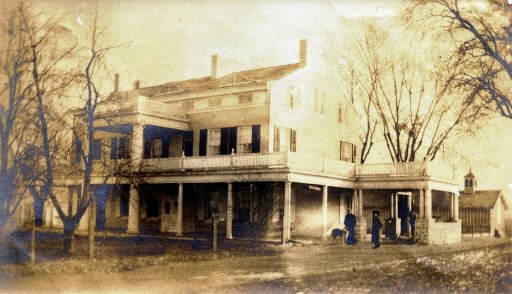 Also of interest:
For additional information on relocation of the mansion, see previous posts: Mules and Dinner conversation.