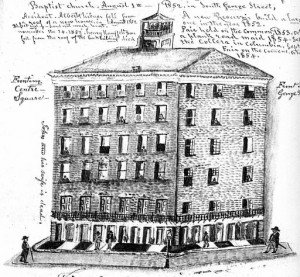 This building in York, as drawn by Lewis Miller, scraped the sky higher than any other in the mid-1800s. John Hartman built a six-story building on the square’s southeast corner in 1850. Today, the Hartman Building stands, although shorter. It’s known as the Futer Bros. building and has been sold and converted into apartments or condos. At the bottom of this post, William C. Goodridge’s five-story emporium was built on the northwest corner of York’s square in 1847. There’s some evidence that John Hartman made his building taller to outdo Goodridge, a former-slave-turned-businessman. Background posts: Buildings reveal a bit about York and ‘I still have my memories … of the bustling downtown York business district’. (Lewis Miller drawing courtesy, York County Heritage Trust.)

The Futer Bros. jewelry business reflects the decline of retailing in York’s downtown.
The longtime Continental Square business operates a Springettsbury Township store. That suburban store’s business has been doing most of the sales. It didn’t make good business sense to keep operating two stores.
So the owners closed the downtown store about a year ago and recently sold the building.
As reflected in the following York Daily Record story, the new owners’ plans are indefinite, but one goal is to restore the look of the building to its original appearance: … 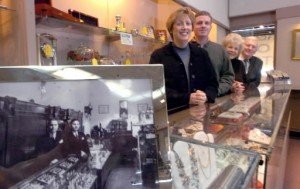 Futer Bros.’ Continental Square property is no longer in the family that has run a business in the space for about 75 years. Pictured left to right: Debbie and David Eigenrauch, proprietors of Futer Bros’ Springettsbury Township store, and David’s parents, Audrey and Justus Eigenrauch, sellers of the downtown store’s property earlier this month. The picture in the foreground is of founders Parke and Leroy Futer.

There are a lot of memories in 1 S. George St. for Audrey Eigenrauch.
Her parents operated Futer Bros., a downtown jewelry store, out of the address from the 1930s until 2006.
They ended up purchasing the building in the mid-1960s.
But then, the economics and politics of the York area changed, her husband said Wednesday.
Their branch store in Springettsbury Township started doing most of the sales, and it didn’t make economic sense to operate downtown anymore.
They closed shop in the city about a year ago.
Earlier this month, Audrey and Justus Eigenrauch sold the property to downtown real estate agent Ryan McKinley of Blue Marlin Real Estate in York, who is partnering with Craig Reich of CR Realty in Spring Garden Township on the deal.
It was bittersweet, Justus Eigenrauch said.
“We had many years of memories,” he said.
Reich, 39, said Wednesday he wasn’t sure what the future might have in store for the old building on the corner of Continental Square.
“Our goal is to bring back the original look of the building,” Reich said.
The original look was something of an eyecatcher in the York skyline. It was seven stories tall.
The Eigenrauchs shortened the building to its current three and earlier this decade thought they had it sold to Commerce Bank.
The bank wanted to put a branch downtown, Eigenrauch said, and has since penned a deal to build a new building in a vacant lot at the corner of North George and Philadelphia streets.
The deal with Futer Bros. was not closed because of problems with other property owners nearby, Eigenrauch said. The deal collapsed, with no other takers, leaving the Futer Bros. building vacant when they consolidated into one location.
Reich said “demolition” of the former Futer Bros. building will begin soon. But that doesn’t mean developers are razing the building.
They are taking off the façade and gutting much of the inside, including an apartment and other add-ons placed in the building since its heyday.
“We don’t really know what we have yet,” Reich said.
The duo invested $475,000 up front in the project – a lot considering they aren’t sure what the end result will be.
Reich is confident things will pan out and is happy to be part of rehabilitating such a historic property downtown, he said.
“It’s more of a long-term project,” he said. 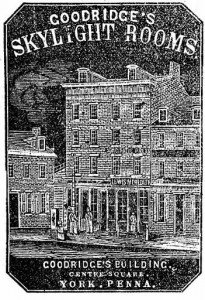 William C. Goodridge’s Centre Square emporium, seen here in a drawing taken from an advertisement, was located diagonally across Centre Square, later Continental Square from John Hartman’s building. The number of stories in each building depends on how you count. If you add the skylights, the Goodridge building is five stories. If you add the cupola on the Hartman building, it’s seven stories. The emporium may have played a role in Goodridge’s involvement in the Underground Railroad.