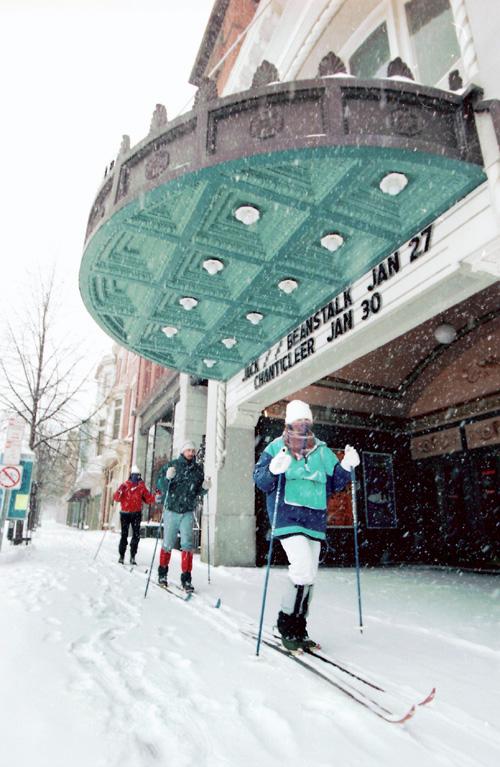 Skiiers pass the boarded-up-tight Strand-Capitol Performing Arts Center during the blizzard of 1996. This blizzard dropped up to a yard of snow in York County. The blizzard of 1993 was just about as severe. Background posts: York County’s top 10 news stories in 2006 and One-room schools evoke multiple memories.

Memories of the York County blizzards of 1993 and 1996 are posted at http://www.ydr.com/remember as part of a audio/video/newspaper series on poignant moments in personal, local and national history.
The York Daily Record/Sunday News and its Web site will collect oral histories from Vietnam and World War II vets, among other memories… .

In February, readers will tell about their first dates, which should touch on such venues as Playland, the Shady Dell and Melvin’s or dancing to the music of the Magnificent Men.
This was one of several York Daily Record/Sunday News articles (1/27/08) on the blizzards:

York County has seen a few snowfalls this winter, but nothing like the blizzards of the 1990s.
In 1993, 20 inches of snow dumped on York County March 13 and 14. Mail routes halted, and motorists were stranded. An even bigger blast hit on Jan. 8, 1996, dropping 30 to 36 inches of snow, forcing businesses to close for a week and York to spend $30,000 a day to remove the white stuff.
Despite the county being mostly shut down during the blizzards, people still had to live their lives. The blizzard surprised some people coming back from vacation, stranded some who were in town for job interviews and added special obstacles to the wedding of one woman’s daughter.
When Joanne Olejkowski’s daughter Christy (Butler) Carlson announced that her wedding would be at Hood College in Frederick, Md., Olejkowski gasped. Hosting a wedding that far from their former home in the Philadelphia suburbs would be a challenge. That was before she knew the blizzard of 1993 was on its way the very day her daughter was to say I do — March 13.
To watch Olejkowski tell her story and to hear more readers share blizzard memories in their own voice, visit http://www.ydr.com/remember.