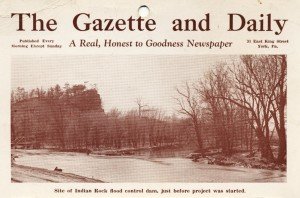 For years, The Gazette and Daily offered an annual calendar. Here, the calendar for 1943 offers a last look at Indian Rock area near York, Pa., before the flood control dam went in. By the time the calendar came out, Indian Rock Dam was up offering a modicum of flood protection on Codorus Creek. Much as changed in the 70 years since this calendar was issued. The newspaper became a tab that year, to save newsprint in World War II. It’s now a broadsheet. And its name has changed. It’s now the York Daily Record. In about two months, the York Daily Record/Sunday News will get a new look as will its flagship ydr.com website. Also of interest:  Web, mobile, tablet technology causes revisions in York, Pa., news media history.

People are always interested in what’s going on at their newspaper. So, here’s a sneak preview of my York Sunday News column in which I discuss your newspaper’s soon-to-be new look… .

The last time we changed the look of the York Daily Record/Sunday News, I made a prognostication.
It would be a decade before we changed the look — the design — of the newspaper, I wrote in 2009.
Given all the change in our business, that 10-year estimate represented a safe bet. The last redesign had taken place in 1993.
Well, I was off a bit — by about five years.
In October, we’ll introduce a new look in your newspaper, which will again bring us up to the style and look of contemporary newspapers. Like clothing, the look and feel of a newspaper page can go out of fashion after a season.
But the change of style will bring some attractive new accessories.
For example, starting Sept. 16, a new feature, “Start Your Day Here,” will appear on page 2A. As the name suggests, it will provide useful stories and photos to help equip you for that day.
We’re moving our advice column, puzzles and horoscope to another page, freeing up space on the second page of the Living section for more extremely local community news: honor rolls, dean’s lists and the like.
So the long and short is that you’ll find more local news in the paper.

This new look is tied to other major changes — transformation, really — going on in our newsroom.
We’re rapidly building new audiences on the Web, mobile and social media.
The idea — it’s been around for at least 200 years — is for a newsroom to create content that attracts readers. Our marketing staff makes access to this audience available to advertisers, so their businesses have a means to tell their story. The advertisers pay for that access.
So, for example, our flagship ydr.com website had 444,000 unique visitors in July. That’s a sizable audience, plenty to attract advertisers. And it does.
To devote the time necessary to build these digital audiences, we are looking to streamline other products that we offer — including the newspaper.
The new design will be attractive and functional. But it also provides templates that keep the appearance of the newspaper from varying significantly from day to day.
This efficiency saves our journalists time that can then be redirected toward growing our digital audiences. For example, we’re more than doubling the geographical area covered by GameTimePA.com, our 5-year-old digital high school sports site that covers York, Adams, Franklin and Lebanon counties.
This year, the site will carry sports coverage in those counties plus Lancaster and the suburban counties ringing Philadelphia. More about that project in the next column.
Further, our sister print editions produced in our newsroom — Hanover’s, Lebanon’s and (soon-to-be) Chambersburg’s newspapers — will sport similar looks. So the page production process is streamlined.
The newspaper production train will become even more efficient with the installation of a new computer system that will allow us to assign stories and photos to print, the Web, social media or whatever platform we choose.
So, the installation of this new content management system, which isn’t cheap, indicates our ongoing investment in the newspaper and its sister digital products.

As some of you have noticed, we are re-evaluating parts of the newspaper that no longer make sense as part of our newsroom transformation.
Some comics and other syndicated features — puzzles and columnists — are tired or no longer created by the original artists. In fact, in some cases, the creator of the comic is deceased.
Yet we’re still charged a huge weekly rate for the comic. So we’re making decisions on whether to retain so-called “legacy” comic strips.
On Sept. 1, for example, we’re ending Beetle Bailey on Sunday and replacing him with the more contemporary Mike du Jour, a contemporary office life comic.
These aren’t easy decisions — and sometimes they’re not popular.
But I often tell people that it’s a privilege for me — I’ve studied York newspaper history quite a bit — to be part of a news media revolution that will make history.
We ask for your patience — and ongoing support — as we work to keep the newspaper healthy, while building a digital future.

Given that I was wrong last time we introduced a new look for the newspaper, I won’t give a guesstimate for how long the upcoming design will last.
But I will echo something I wrote last time:
We believe you’ll feel comfortable with our new appearance.

The York Daily Record and its predecessors have had 9 publishers in 97 years.