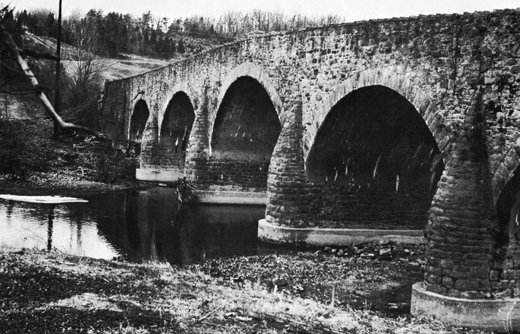 The five-arch stone Straight Hill Bridge stood for more than a century on the Carlisle Road outside of Dover. Also of interest: A bridge that stood for 142 years came down in hours.

An e-mailer recently assumed that Cumberland County came out of York County in 1750, in the same way Adams County withdrew in 1800.
Actually, York County was erected from Lancaster County in 1749, and Cumberland County emerged from Lancaster the next year.
This gives York County its long-touted distinction of being the first county west of the Susquehanna River and the fifth formed in Pennsylvania.
The two new counties, sharing a common border, immediately worked to increase their ties… .

In 1751, residents petitioned courts of York and Cumberland counties to open a road between the two towns.
Over the years, that road has borne heavy traffic. Jeb Stuart’s 4,500-strong Confederate cavalry unit traveled on parts of it from Dover to Carlisle as the Battle of Gettysburg raged to the west in 1863. Part of Jubal’s Early’s gray division marched from Davidsburg Road into York in the days before the battle.
Anytime a parade moves from the city to the York Fairgrounds, it uses part of it. A parade marking Gen. Jacob L. Devers homecoming – after he commanded the 6th Army Group in World War II – traveled along that route.
And, of course, anytime it’s York Fair time, traffic crawls.
Today, in the York area, that road is appropriately known as the Carlisle Road. And, in the Carlisle area, the York Road.