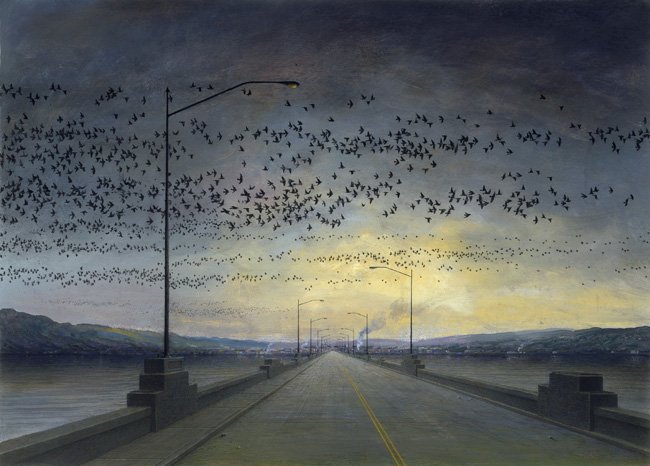 A major exhibit of York County artist Rob Evans’ work is open at the Reading Museum through Dec. 7. It’s a rare opportunity to see this York countian’s art all in one place. (Yes, that’s the Columbia-Wrightsville Bridge, aka Veterans Memorial Bridge, in Evans’ well-known ‘Migration’). ‘This will probably be the only time in the next decade that all of my major works will be gathered together from museum and private collections for a nearby exhibit of this size (Reading is the closest museum to York with a gallery space big enough to accommodate),’ Evans wrote in an email. Also of interest: ‘FOE’ Civil War exhibit lives to fight another day in York, Pa..

Rob Evans is one of the best-known artists of this generation with York County ties.

His current exhibit at Reading Public Museum – ‘Rob Evans: Mystery and Metaphor – Four Decades of Work’ – is drawing attention from all over. 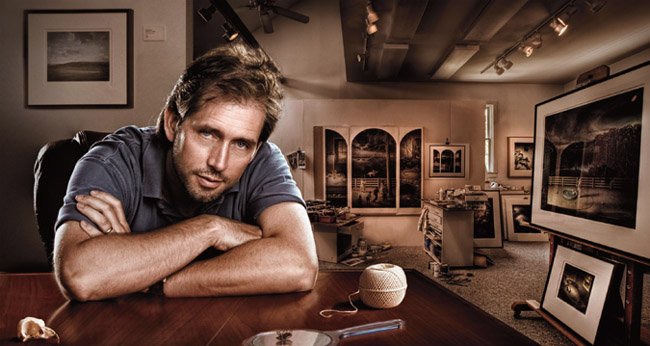 The York Daily Record/Flipside and its various websites has followed the York County-based artist for years. Evans also is known for his curatorial talents – a leadership gift of bringing together the work of various artists into themed exhibits.

When you’re familiar with a well-known York countian and his work, it’s  interesting to read what other media say.

So when The Mercury in Pottstown, our sister newsroom, wrote about  ‘Mystery and Metaphor,’ I took note and eagerly share it here with YorkTownSquare.com readers.

A visit to the Reading Public Museum’s exhibit, “Rob Evans: Mystery and Metaphor — Four Decades of Work,” is a bit surreal. Evans has a gift for making the ordinary extraordinary. Some of his paintings capture quiet moments in time and others explore the infinite vastness of it.

Whether it’s a painting of a kitchen scene with a refrigerator door open and dishes in the sink or an infant sleeping in the middle of a big bed, Evans draws the viewer into a very personal setting. At the same time other canvasses look at the big picture, the evolution of man and the beauty of nature as seen in detailed paintings featuring moths and insects.

His technique is masterful. Look closely at a painting and you see minute daubs of paint, but step back and you see a myriad of birds in “Migration” or a blanket of crisp autumn leaves under a tree on a patio.

Once you have seen Evans’ work, you will recognize it anywhere. His viewpoint is unique and intriguing and his subject matter is deeply personal and at the same time — universal.

The museum press release describes the exhibit this way: “The show features more than 40 works spanning four decades of work by this York County artist. Ranging in size from two-inch square, meticulously crafted miniatures, to monumental triptychs and altarpieces up to 12 feet in length, the works in the exhibit provide a cross section of the themes the artist has worked with over the years. The pieces draw unconventional metaphors from the local, natural landscape and commonplace people, places and things near his home and studio along the Susquehanna River.

“Presented in a broad variety of media — oils, acrylics, pastels, graphite, lithography, watercolor and digital printmaking — these themes include a series of mysterious interiors which have a decidedly narrative quality, images of insects and natural history specimens, figurative works portraying the artist’s family, and luminous studies of the Susquehanna River Valley during various seasons and times of day. The exhibition is grouped by theme and subject matter and includes some of the artist’s most well-known major works such as Evening Ritual (1989), Cicada (2001), Moth (1993), and Origins (2007), as well as some more recent paintings.”

Evans now lives on a farm once owned by his maternal grandparents, overlooking the Susquehanna River in York County. He lives there with his wife Renee and two children (all artists), and maintains his studio in a renovated barn on the property. His unique studio will be featured in the upcoming book Artists Homes and Studios by Ashley Rooney to be published by Schiffer Press in 2015.

His works have been acquired by and exhibited in prominent museums around the globe including the Metropolitan Museum of Art, National Gallery of Art, Corcoran Museum of Art, San Francisco Art Museums, Portland (OR) Art Museum, Delaware Center for Contempoary Art, Arkansas Arts Center, and the Tretyakov Museum in Moscow to name a few.

The exhibit, which is sponsored by Penske, will be on view in The Museum’s second floor American Gallery through Dec. 7.

A second opening of Rob Evans work at Reading Public Museum is set for 1-4 p.m., Saturday, Nov. 15. ‘This for the benefit of my many loyal friends and supporters from York and beyond traveling a longer distance to see the exhibit,’ he wrote. See the museum’s description of the exhibit, and listen to an interview with the artist in his eastern York County studio.

Check out these stories and photos telling about York County artists from Lewis Miller to noted contemporary artists – Rob Evans and others – at YorkTownSquare.com’s artists category. Also, Rob Evans’ category on YorkTownSquare. 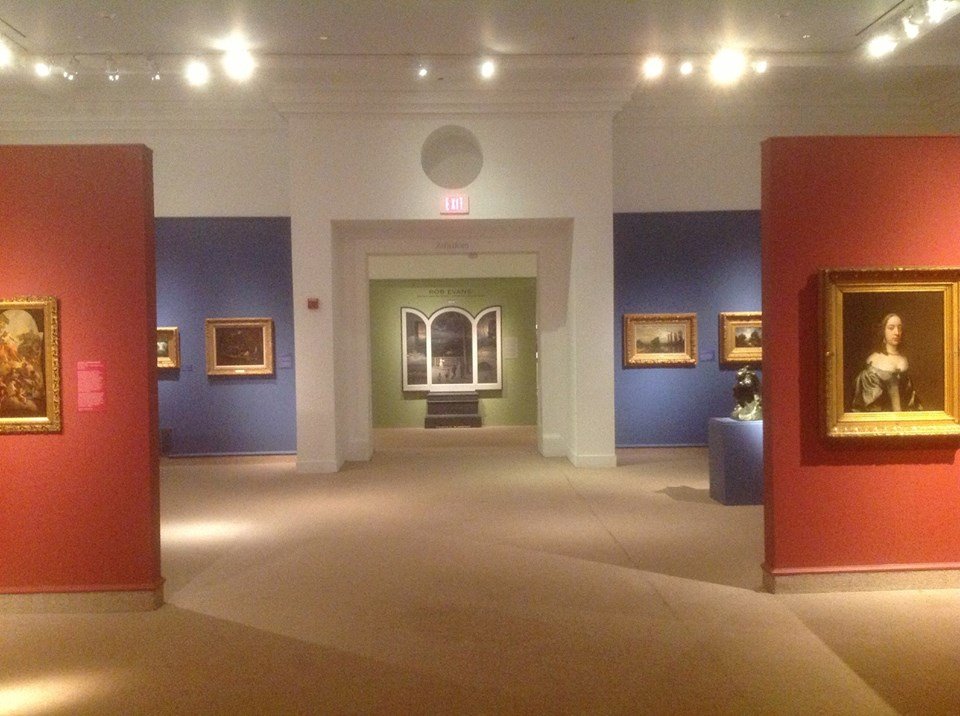 ‘Mystery and Metaphor’ in Reading, as seen on Rob Evans Facebook page.