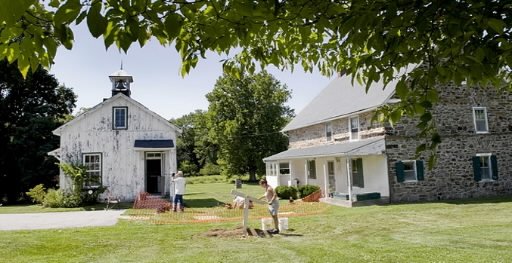 The mid-1700s Schultz House stands near the former site of Camp Security in Springettsbury Township. A dig on the site in 2010, seen here in this York Daily Record/Sunday News photograph, helped raise public awareness about the nearby prisoner-of-war camp, which detained British prisoners in the American Revolution. Jonathan Stayer will present about the Springettsbury Township camp from another nearby location, Good News Free Will Baptist Church, on Sunday. The free program is set for 2:15 p.m. at the church on Locust Grove Road. Also of interest: Researcher pulling together strands to weave story of British POW Camp Security.

Camp Security, York-area’s Revolutionary War POW camp, brought out stories about the profound and, well, not quite as profound this week.

One story tells about Jonathan Stayer’s talk Sunday about the camp, a free program open to the public sponsored by the South Central Pennsylvania Genealogical Society.

Here’s the neat thing about Jonathan’s presentation. This York County resident and supervisor of Reference Services at the Pennsylvania State Archives hopes to take participants outdoors to see possible sites from the church’s lawn.

Yorkblogger June Lloyd wrote about the presentation in a Universal York post, On Site With Camp Security:

“The weather forecast looks good for Sunday, and much as of the Camp Security site is visible from the church grounds, the program will probably include an outdoor component with Stayer pointing out conjectured sites of the secure stockade and of Camp Indulgence, the village inhabited by low-security prisoners and their families.”

So that’s the profound, a program that begs attendance.

Then we come to the not-quite-as-profound story because it involves ghosts.

But still interesting with a strong historical component.

Could Camp Security, a Revolutionary War prisoner-of-war camp in Springettsbury Township, be haunted?

Leo Motter, who has written a book about haunted places in York County, found a poem written in Pennsylvania Dutch that talks of Hessian soldiers who lurk there.

It describes of doctors who dug up their bodies, boiled off their flesh and took the bones home.

It talks of seeing “many Hessian faces all grim, white and cold, with bones as cold and white as snow.”

And it recounts hearing a lonely soldier cry out, blaming Colonel Rahl for his “carelessness” and leaving him so far from home.

Motter said he couldn’t read the poem, “Hessian Valley” written by Henry L. Fisher, so he found Katie Weisser, who is earning her teaching certificate, to translate the German into English.

Pennsylvania Dutch is fairly phonetic, and it helped to read the poem out loud, Weisser of Red Lion said. It’s an interesting piece — with three distinctive parts — so it can get a little confusing.

Most ghosts in York County remain neutral, but the ones described in the poem about Camp Security are angry, Motter said.

June Lloyd, librarian emerita of York County Heritage Trust, pointed out a problem with the poem: Hessians were not held at Camp Security. Only British and Canadian prisoners were, and it has been well documented.

A poem can be about facts or it can be a story, she said.

“I’m afraid that was an imaginative piece that he wrote,” Lloyd said.

Some Hessians did settle in the York area, but that was likely because they were not well-guarded as troops moved the prisoners of war through the area, Lloyd said.

A cemetery did exist at Camp Security, but it has not been found to date.

“We’re hoping to maybe be able to find that at some point in time,” said Carol Tanzola, president of the Friends of Camp Security.

Two tracts of land where historians believe the camp once stood has been preserved in the past two years. The Conservation Fund acquired a 115-acre farm last year.

In the spring, local developer Timothy Pasch sold his 47-acre property to the Conservation Fund, ending a more than decade-long fight over whether it would be preserved or become a housing development.

Motter said he hopes archeology work can be done to find the cemetery.

“We should treat that land more sacred than we do,” he said.

So we have all kinds of stories swirling around the Camp Security.

As long as that interest remains, it increases the chances of success for preservationists to secure and interpret the site.