This restored mill looks great from the road. Same thing close up. The York, Pa., Daily Record received a tour of this wedding venue and came up with this lineup of photographs showing this impressive place. Stone Mill 1792 is one of several wedding venues opening around York County. But York County isn’t in danger of having too many such venues, a YDR story states.  The county, because of its central location, can draw brides-to-be from Baltimore and Philadelphia, as well as locally, a wedding planner told the YDR. Interesting. For centuries, York County’s location has been one of its greatest assets. See an additional photo of the stone mill’s interior – a vaulted room – below. Also of interest: York County has long been in the middle of things.

Stone Mill 1792 was originally a paper mill founded, yes, in 1792. This is the mill’s boutique. Also of interest: Glenville’s Stone Mill picture perfect after snowfall.

The Grand History Trail concept sure is interesting. That proposed 300-mile hiking and biking loop would include York County’s rail trails, including the old trolley line seen here near Spring Grove. It would extend west to Frederick, Md., and east to Annapolis. It would be great to see bikers and hikers from far away trekking through York County. Details: Grand History Trail.

From York to San Diego: This museum has a trolley car that ran on York County’s streets: 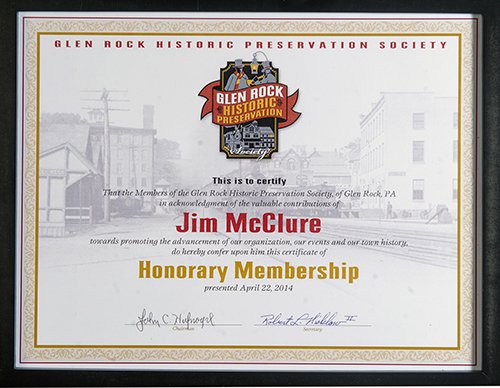 I’m flattered and proud to receive this recent honorary membership into the Glen Rock Historic Preservation Society. I took it down to Mignano’s down the street after the society’s meeting at the Peoples Bank Building and showed it to Sal, the owner. The eatery’s owner had proudly showed me his citizenship papers a couple of years ago. So I wanted to share this significant moment with him. The sense of accomplishment in receiving this honor was heightened when the society’s John ‘Otts’ Hufnagel sent me a note: ‘I guess it is safe to tell you now, a good part of the text (not all) for your certificate was taken from a 1903 honorary member certificate presented to W. O. Bixler by the Glen Rock Musical Association while Roland Seitz was conductor. Don’t know what that means, but you appreciate Roland Seitz and the now Glen Theatre originally built by the Musical Association 101 years ago.’ Yes I do, Otts.