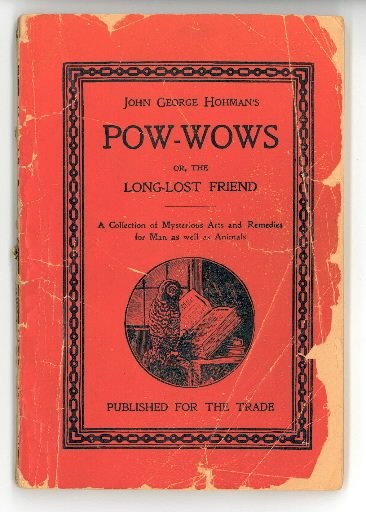 Ross McGinnis, author of ‘Trials of Hex,’ owns suspected witch and Hex murder victim Nelson Rehmeyer’s copy of the ‘Long Lost Friend.’ The caption in ‘Trials’ states: ‘Nelson Rehmeyer’s book, Pow-Wows, or the Long Lost Friend, by John George Hohman, which Blymyer was told to obtain, along with a lock of Nelson Rehmeyer’s hair, which he was told to bury.’ That was the spell to break the spell allegedly cast by Rehmeyer. Blymyer and two accomplices botched the assignment and killed Rehmeyer. Hence, the notorious Hex murder unfolded. Also of interest: York County’s Hex murders story: ‘Echoes and Re-echoes with intensity and interest’ and All Hex murder stories and photos from the start.

J. Ross McGinnis and I participated in a taping of a PCN show on the Hex murder trials of 1929, which continue to fascinate folks.

I culled through posts from this blog’s Hex murder category, Ross’s authoritative “Trial of Hex,” and other resources to come up with talking points for the interview.

Here are five of those notes, with five more coming Tuesday:

1. Nelson Rehmeyer’s direct descendants, especially great-grandson Rickie Ebaugh (the last of the line), make no bones that old man indeed practiced pow-wow (or Braucherei, Brauche), a supposedly magical art allowing practitioners to heal illnesses and protect the vulnerable by casting charms and performing rituals and prescribing herbs. In short, Rehmeyer was a “white witch.” There is no evidence that Rehmeyer was a Hexenmeister or Hexer, a black witch who cast spells with malicious intent.

2. Proof that Rehmeyer was associated with the black arts? He received a Christian burial and is interred in Sadler’s Church cemetery in southeastern York County.

3. Nonagenarian Jeannette Harvey knew Nelson Rehmeyer. Here are a few of her comments from an interview only a few years ago: “Nelson was self-educated and a good person to talk with. He is a distant cousin of mine.” “Nelson wasn’t what they said.” “Mom and Dad were disgusted when powwowing was used to excuse the guys who did the deed. Everybody around here felt so bad when that happened.”

4. I wrote in my World War II book “In the Thick of the Fight” that this case involving superstition and white magic and the casting of spells and the like occurred only a decade before York County manufacturing prowess reached its zenith in World War II. So, you had York countians serving as internationally known forward-thinkers on the military defense front – known as the York Plan – at the same time that another set of residents were practicing medieval healing arts.

5. John Curry, one of Rehmeyer’s assailants, became an artist after his release from prison. His art work hangs in area homes today.

Yorkblogger June Lloyd tells a riveting story about a man who kept a hand-drawn charm copied from ‘Long Lost Friend’ for good luck when he hunting. It was found rolled up in the stock of a shotgun.

Also of interest:
To see all Hex Murder posts/photos from the start, click here.
Or if you prefer, click on these individual links with their extensive collection of photographs:
Powwowing: ‘… It was here, and it had many adherents … , ‘Powwowing was done for good’, Hex headache cure: ‘Tame thou flesh and bone’, Relative: Evil in Hex murder came from outside, Hex murder fascinating tale of mysticism, occult: Part 1, ‘Trials of Hex’ makes sense of notorious murder case: Part 2 , Little-known facts about Hex murder trial emerge, Hex murder compared to O.J.’s, Anna Nicole Smith’s cases, Hex house visit offers surprises, Visiting the scene of the crime.