York County’s Gravity Hill is where ‘down is up,’ and that’s no Halloween tale 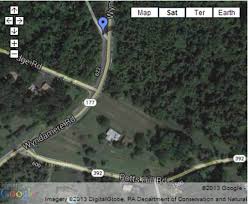 Rural York County’s Gravity Hill, blue pin, has all kinds of Halloween-like urban legends – and country legends – attached to it. But one thing is certain. Your car seems to point down hill and you roll the other way.  Gravity Hill is the intersection of Valley View Road and Wyndamere Road in Fairview Township. Also of interest: Spooky old York incinerator now used as crematorium and In York, Pa.’s, Elmwood Mansion: ‘… A shadowy figure of a hoop-skirted woman…’.

Or as York Daily Record/Sunday News reporter Lauren Boyer wrote in October 2011  after interviewing a scientist:

“This hill is an optical illusion, he said, explained by the principle of ‘gravity paradox,’ the idea that different objects with mass centered in different areas have infinite gravitational capabilities.”

Here’s Lauren’s story – York County’s “gravity hill’: A ghostly push, or a trick of the eye” – explaining “gravity paradox” and, better still, why “down is up” in northern York County:

Around the bends of rural Wyndamere Road, just beyond the graves of Tri-County Memorial Gardens, there’s an intersection in Fairview Township where mounds of earth and trees rising from the shoulders keep a legend alive.

Masquerading as any other York County hill, Pleasant View Road seems to defy the laws of physics.

Down is up — or so it seems — at the stop sign where drivers can shift their vehicles into neutral and quickly realize the gravity of the situation.

Is it a magnet? An illusion? Paranormal activity?

That all depends on what you believe.

Some locals claim it was a group of teenagers, “football players, perhaps coming from a game at Red Land High School just up the road,” that died instantly when a truck t-boned their car at that intersection, according to York Hospital Dr. Leo Motter, the author of “Haunted Places in York County Pennsylvania.”

The ghosts of those young lives cut short — an incident of which Motter could find no records — are said to be behind the phenomena.

“These kids somehow try to protect people from this dangerous intersection,” he said. “They push the cars away to save people.”

Similar sites exist around the country, mostly asserting the same story of haunted heroism — someone killed in an automobile accident returns from the grave to spare passing motorists from a similar grisly fate.

Many, like one in Bedford County, have become tourist attractions, garnering more attention than York County’s secluded wonder — an unmarked pilgrimage destination for the occasional thrill seeking teenager or local resident trying to frighten a friend.

“Are people still doing that?” he asked.

Dugan first heard the legend 20 years ago. He hasn’t tested the theory himself.

“I don’t think we really ever did catch a boatload of people out there, quite frankly,” he said. “We just hear about it from time-to-time.”

Four years ago, on an early summer evening, she was returning home from scuba lessons at Red Land High School with her now-husband and his parents. They told her the story of ghost children, victims of an ill-fated bus journey, known to push cars up Pleasant View Road.

“Not that anyone believed it, but I guess it makes a good story,” she said.

“I’m sure that when I have kids someday, we’ll show them, too. Freak them out around Halloween.”

Perhaps a physics lesson, too, might be useful. Things do not roll uphill, said professor Sardari Khanna.

This hill is an optical illusion, he said, explained by the principle of “gravity paradox,” the idea that different objects with mass centered in different areas have infinite gravitational capabilities.

Also, he said, and the combinations of angular terrain in the area could produce the illusion that a slight downhill slope is actually uphill.

On Friday, in his science lab at York College, a wooden cylinder rolled easily down two v-shaped wooden bars propped into a slope.

“Watch the magic,” he said, placing a wooden prism — two cones base-to-base — at the bottom of the same configuration.

Though it appears to roll upward, its axis, or center of mass, is actually getting lower — like your car might be on Pleasant View Road.

“It has to be,” Khanna said. “There’s no question about that.”

Bedford County has a Gravity Hill that has been turned into a tourist attraction. The hill is near New Paris  and has a website created by the Bedford County Visitors Bureau. For more information, visit www.gravityhill.com or call (800) 765-3331.

· What do you think about those ghost stories linked to historic sites in York and Adams counties?