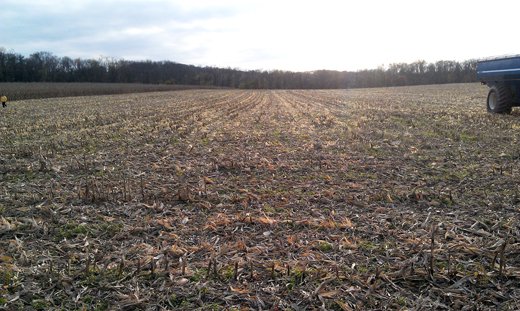 This Springettsbury Township field, in the backyard of Good News Free Will Baptist Church on Locust Grove Road, is the presumed site of Camp Security’s stockade. The researcher making that assessment is respected historian Jonathan Stayer, who presented about Camp Security at the church recently. This American Revolution camp housed British prisoners from 1781 to 1783. (See additional photograph below.) Also of interest: Researcher pulling together strands to weave story of British POW Camp Security.

The reconstructive information-gathering of Jonathan Stayer, June Lloyd and others about Camp Security is providing a base to build interpretation and exploration of the site.

That would come after property on which it was built is, well, secured.

Stayer updated an audience about the camp’s 21-month duty as a POW camp at November’s South Central Pennsylvania Genealogical Society meeting. Here are 9 points about the camp gleaned from Stayer’s indoor presentation and outdoor field trip:

– British prisoners from the Convention Army, prisoners from the American victory at Saratoga, N.Y., and Cornwallis’ command surrendered at Yorktowne, Va., were detained in Camp Security. No German prisoners – mercenaries known as Hessians – were housed there.

– Camp Security is the name usually attributed to a stockade on the site. Actually, more than one stockade might have gone up on the site. A separate camp outside the stockade was called Camp Indulgence.

– A cemetery for the camp might have been located in an area covered by Penn Oaks South today.

– The Schultz House, a mid-1700s stone structure, might have been used to quarter camp guards. It would presumably be the headquarters for interpretative efforts when the land is acquired. The property is now up for sale.

– At any one time, as many as 2,000 prisoners might have occupied the site.

– Some prisoners could travel within a 10-mile radius of the camp and commissioned officers lodged in York.

– An interesting observation is that artist Lewis Miller, who drew hundreds of York County scenes, did not sketch the camp or its site. It is presumed that farmers used the stockade poles for fences and nothing was left by Miller’s time – the first 75 years of the 19th century.

– The most visible reminder of the camp today is Springettsbury Township’s Camp Security Park, off Eastern Boulevard.

After Jonathan Stayer had talked about the camp in the brisk outdoors for several minutes, he concluded with a gesture to the field: “Nothing much else to say except there it is.”

Researchers like Stayer and citizens group like Friends of Camp Security have a lot more to say about the historic site’s future. Research continues and fundraising is ongoing to secure available land that is believed to have been part of the Camp Security.

These yorktownsquare.com posts include information about Camp Security. 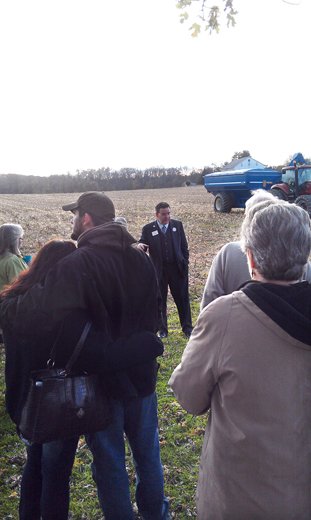 After an indoor presentation at Good News Free Will Baptist Church, Jonathan Stayer and his audience attending the South Central Pennsylvania Genealogical Society event walked outdoors to see the field, background, in which he believes Camp Security was located.