YorkTownSquare has put up a past post with a black and white photo of the marchers in Dallastown, Pa., post World War II. And also posted is a colorized version of that picture that covers a wall in the Metro Bank near Interstate 83 and South Queen Street in York Township. But above we have them together – an interesting comparison. You feel you’re marching with the military. The colorization of local scenes is a successful program by Metro Bank to capture community. How do we know it works? If you click on the comments button from the York Daily Record Facebook page above, you’ll find a community conversation about the photos, including a picture from a resident, Angie Deller Neff, with an arrow identifying her great uncle. Check out this story of another such an ID in a Commerce Bank mural as well as this one in which Elvis was spotted.

We enjoy receiving insights from Eastern York County’s Betsy Shaw, who wrote a comment on this recent Holtwood Dam post: 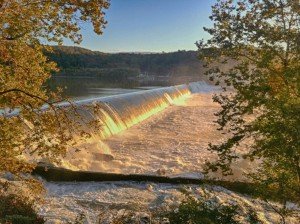 “The Holtwood area is terrific – on both sides of the river. I grew up spending a lot of time on the “Lancaster side” trap-shooting and, early on, watching the “Susquehanna navy” gathering coal. We didn’t live there but we did own land which fitted in with my father’s hobby of restoring old stone farm houses in southern Lancaster County. I knew that Holtwood was named after 2 Canadian bankers but didn’t pay much attention.

“Later on I went to college in Canada – McGill University in Montreal – I remember in 2nd year or so going to a meet-greet gathering. Someone asked where I was from – well, I replied “Some place you’ve probably never heard of – near Lancaster in Pennsylvania.”
“A chap standing nearby said that he had heard of it – his uncle had built a dam someplace down near there. Wow!
“Of course, his uncle was Sir Herbert Holt who for years was head honcho of The Royal Bank of Canada. Holt and Edward Wood, a banker & insurance chap from Toronto poured money into what had become a very shaky project. Hence, Holtwood – the name shows up on maps as early as 1915 or so.
“The whole story is a neat one – especially if one is interested in fairly early hydro-electric projects.”
+++

My, this is an intriguing nearby place to put on your visit list. Here is a big list of a bunch more small-town, and city, museums.