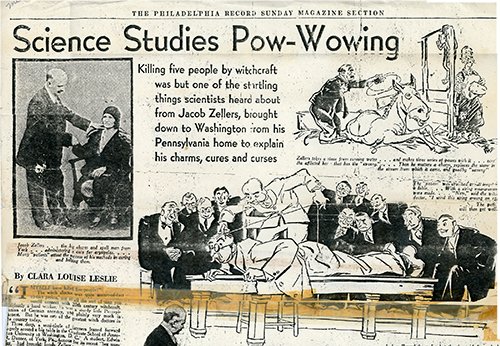 York countian Jacob Zellers spoke to an American University class about ‘charms, cures and curses’ circa 1931. He made a distinction between powwowing and other ‘good influences,’ and witchcraft and hexing, both ‘bad influences.’ A reporter sat in on the class, and this story appeared in The Philadelphia Record and other newspapers after the Hex Murder and its subsequent trials in 1928-29. Also of interest: Check out these stories and photos of York County’s Hex Murder and trials.

+++
Many points fascinate people about the Hex Murder of 1928 and the resulting trial for the three assailants who killed Nelson Rehmeyer, a suspected witch.
Here’s what fascinates me the most:
This represented a low point for York County, which showed itself internationally as world headquarters for witchcraft and hexing. Just a decade later – before and after Pearl Harbor – York County gained an international reputation for its technological savvy. Its industries shared manpower and machines to land big government defense contracts. This program of applied science and management, emulated by many communities, was known as the York Plan.
Someone might try to argue the Hex Murder was a one-time thing – a blip in what was otherwise an ever-progressing York County, Pa.
But then you run across an undated article in The Philadelphia Record – probably January 1931 – with the ironic headline: “Science Studies Pow-Wowing.” It tells of the pervasive practice of witchcraft and hexing of the type intertwined with the Hex Murder and trials.
The Record tells the story of Jacob Zellers, a West Manchester Township resident who admitted to practicing powwowing – a good influence, as he described it. Powwowing was widely practiced to oppose witchcraft and hexing, Zellers told a graduate class at American University.
Maybe Zellers, described as the one of the greatest witch doctors in the country at that time, was being hyperbolic in his presentation. Let’s hope so.
He explained that a role of a powwower was to seek out those casting evil spells and levy magic of a kind to kill the perpetrator of black magic. He claimed five people died in this way.
He cited a case in which a daughter-in-law was seized with an illness. After doctors failed, Zellers was called in, discovered the mother-in-law was the “hexer” and drove the evil spirit away.
After the mother-in-law flirted again with hexes,  Zellers resorted to stronger magic. The daughter-in-law began to grow strong, and the spell was driven back to the mother-in-law. She died nine days later.
Did authorities investigate the five deaths?
“No!” Zellers told the class. “If a person gets sick from some strange illness that no doctor can diagnose and dies of it and I’m five miles away, what can they do to me? But the victim dies just the same!”
+++
Jacob Zellers explained many other things to the university class about hexing, witchcraft and powwowing.
For example, the Sixth and Seventh books of Moses are key to casting an evil spell, he said. Moses meant them for good, while his descendants use them for evil. These books are not in the Bible, he noted, but available if you wanted to read them.
“By praying before a personal object once owned by the person to be ‘hexed,’ an intense hatred is projected from the ‘hexer’ to the ‘hexed,’” he said.
He cited an example of seeing a woman with a fork she had obtained chopping it against the rafters in the barn, “hexing” her rival with it.
+++
You just can’t make this stuff up.
At least, Zellers’ stories were credible enough that other newspapers picked up The Philadelphia Record’s story. For example, it appeared in the Daily Avalanche of Lubbock, Texas, on Jan. 23, 1931.
When you write about someone in York County from the 20th century, you’ll find relatives in the 21st.
Indeed, relatives of Nelson Rehmeyer and the three assailants live here today.
One of Jacob Zellers’ relatives is Terry Zellers, a co-worker at the York Newspaper Co., who called this story to my attention.
He noted that his grandfather, whom he does not remember, was known as a good or positive powwower.
And he remembers family stories about the Sixth and Seventh Books of Moses. The family discussions explored who had them and where they were.
“When my grandmother passed away and we had an auction,” he said, “we never did find them.”
That’s probably for the better, lest they get into the wrong hands!
+++
The practice of powwowing – even as York was so deftly using the most recent science in manufacturing in World War II – remains intriguing.
You can look at major moments in York County’s past and wish we would have walked through history as a community on a straighter path.
Our forefathers bravely played host to the Continental Congress here in 1777-78, and provided an environment productive enough that our nation’s founders created a government framework to take on a foreign power marching across America’s soil.
Then in the Civil War, less than a century later, our faint-hearted leaders surrendered to a Confederate division marching across York County farmland.
In the 20th century, we came off the 250th anniversary of York County in 1999 as an inspired community. Then we ran into the race-riot trials because we had failed to find justice in two murders during rioting 30 years before.
One wonders how our community’s decisions today – or lack of such decisions – will be remembered 100 years from now. That’s an interesting test that today’s community members and leaders should apply.
+++
Jacob Zellers himself lived in two worlds.
He was a witch doctor and a reported auto painter. So his livelihood – he didn’t take fees for his powwowing – was based on auto making, one of the most significant technological gains of the early 20th century.
His presentation convinced Clara Louise Leslie, the writer of The Philadelphia Record’s story.
“That results do sometimes follow powwowing and witchcraft seems to be an undisputed fact,” she wrote.
“The question is, ‘What is the power underlying witchcraft?’ Is it purely suggestion, and if so, how and under what circumstances does it work?”
All this less than a century ago. 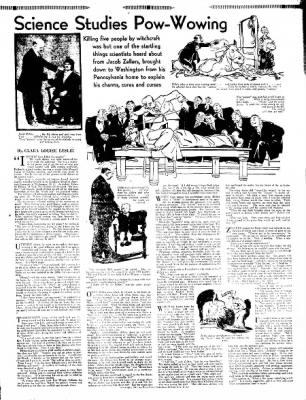 To see the full page (and a partial transcription), check out: Newspapers.com. (There appears to be a charge).

+++
Also:
The article says Edwin R. Danner of York had interviewed 125 people in York County to substantiate the witchcraft stories. I couldn’t find that research in book form, unless it’s part of Danner’s Pennsylvania Dutch dictionary. Does anyone know about other publications by Edwin R. Danner?

Check out these stories and photos from YorkTownSquare.com’s archives – about 10 years’ of content.