York County weather forecasts before, during and after Tropical Storm Agnes’ wrath 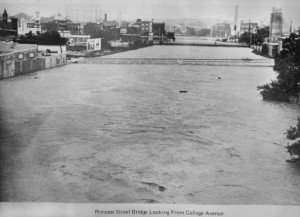 The scene shows the Princess Street Bridge in York looking from the College Avenue Bridge after Tropical Storm Agnes struck in June 1972. It appears on the wall of the Indian Rock Dam office. The storm flooded York County – and much of Pennsylvania – 40 years ago this week. Check out these photos and stories about what bad weather has brought to York County over its history

Looking back, in June 1972, a staff member – or maybe more than one staffer – of the York Daily Record had the job of putting a brief weather forecast on the newspaper’s front page.

So, as Tropical Storm Agnes raged north, causing evacuations of the Florida panhandle, in the week of June 18, the forecasts began: 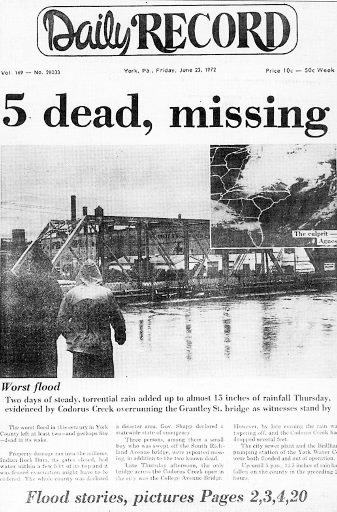 The York Daily Record tells the outcome of the storm’s wrath on June 23, 1972.

Thursday, June, June 22
(Flooding hit county. This forecast was notched into a photograph to ensure it got on the front page.)
Rain. High in the 70s.

Monday, June 26
No weather given.

For those writing the forecasts as rain pounded down and flood waters rose, it was business as usual. Perhaps by Monday, someone had suggested that the forecast writers might just give it a rest.

A tree, seen in Shenks Ferry in 2004, notes Tropical Storm Agnes’ legacy from 1972 and the high-water marks for other Susquehanna floods.