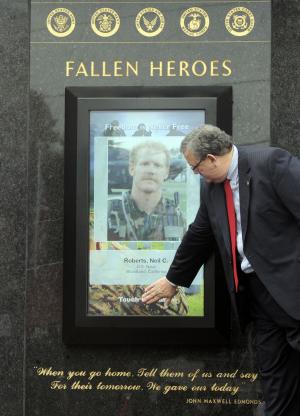 This is a little different – a touch screen memorial in a cemetery, York, Pa.’s, Prospect Hill Cemetery in this case. The image of Navy Seal Neil C. Roberts, the first to die in 21st century wars, appears on the screen, demonstrated by cemetery owner Jack Sommer. The hero is buried in Prospect Hill. The Fallen Heroes Memorial, dedicated Saturday, shows rotating images of 6,600 mortalities from fighting in Afghanistan and Iraq. Also of interest: Navy SEAL Neil C. Roberts: ‘In this simple grave … lies a national hero’.

Served with George: This New Freedom vet served with George Patton in World War II. He was one of Patton’s Ghost Troops. And find out how Patton’s men gained that name: Vet shares memories.

Heartwarming memories: York soldier, back from Afghanistan, comes home to more than family

Today’s observances: Check out this list of Veterans Day events around York County.

War stories from Digital First Media: World War II was fought all over the globe, on sea, land and sky. It was a conflagration unlike any seen before or since. Tens of millions of people died, many in the Soviet Union and Eastern Europe. It was a war of bombs that fell from the sky, many thousands of planes and tanks, battleships and submarines, in addition to the millions of foot soldiers who fought and died in trenches and assaults.
Release time: Now available
CI code: 21843846
NGPS slug: DFM_ww2remnants_102412
Embed:

A World War II British Royal Air Force Kittyhawk fighter plane was found in the Egyptian desert May 10 in a remarkable state of preservation. Check out an amazing photo gallery at the Telegraph. (Jakub Perka/BNPS.co.uk) World War II was fought all over the globe, on sea, land and sky. …