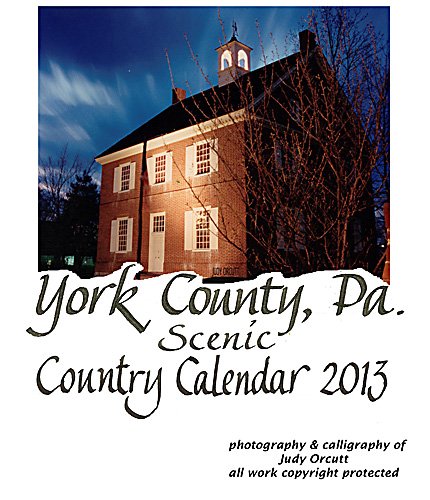 Last year, it was York County barns. This year it’s Scenic York County featured on  QuilliGraphy’s photography calendar for 2013. And the Colonial Courthouse gains the cover of artist Judy Orcutt’s calendar. Judy’s blog www.quilligraphy.com/blog lists the monthly photo themes: ‘January has a scene of an old truck on a farm in Manchester. I like this old truck! February is a view of Rosenmiller Farm in York Township with the lovely lake in the front. March is a scene taken in Lancaster county looking through to York county on the river. April shot was taken at 8 PM on an April evening. It is the Colonial Courthouse. May was near Holtwood Dam. I call it an Amish rest stop. June was of ranunculus flowers. Their color is so intense and they last a long time. July is of the flags at Prospect Hill cemetery. So many – what a reminder of our soldiers! August is of the noble York county tomato. Waited for all through the winter. September was at the Indian Steps Museum and of a Heritage Festival. October shows a scene of the lovely pumpkins seen at produce markets. November is of the intense skies with beautiful winter sunsets. December is a long exposure of Christmas tree lights. Judy wrote about her calendar and a companion desktop calendar: ‘Both of these calendars are done with calligraphy lettering and numbering and artwork or photography of the artist… .’ Ordering information is available through QuilliGraphy’s’s website: http://www.quilligraphy.com/blog. Also of interest:The raising of the cupola on the Colonial Courthouse, courtesy of artist Cliff Satterthwaite.

Ford Risley, head of Penn State’s Department of Journalism, penned it.  I know Ford, and this is certain to be thorough look at communications in the Civil War.

Just as the Civil War helped reshape the U.S. militarily, new technologies and a growing demand for information during the war influenced the nation’s press, according to a Penn State researcher.

“It was absolutely an important moment in the history of the press,” said Ford Risley, professor and head of the Department of Journalism. “The practices, technological development you begin to see during the war — the importance of the telegraph, the use of illustrations, for example — and the growth in demand for newspapers, so many of these things came together during this remarkable and tragic event.”

Farther down in the release, Ford said: “America really became a nation of newspaper readers during the war.”

I didn’t know that, and I’m sure there’s a lot more in there to feed everyone’s sense of discovery.

A rare occurrence:  Scott Mingus and I will sign our jointly written ‘Civil War Voices From York County’ and other books at Irvin’s Books.

With email and the like, Scott and I see each other only occasionally. But we’ll be together on Dec. 20.

This is neat because Scott and I are not only colleagues. We’re also friends.

Now the winners and their work are online at the York County Heritage Trust’s website. Check out this work from these young students of history.

Forum of the day:A York County woman saved exotic birds, cats and other animals from a house fire:  Have you ever had exotic pets? Do you think such pets are a good idea or maybe not so? Please comment below. Background: Day of the alligator … in Poorhouse Run and York City has a long association with alligators. Yes, alligators.