Campers at Penn Grove Camp near Smith Station in Heidelberg Township are seen near one its cottages. The Gospel Center operated this church camp years later as a spiritual retreat for its families. (York Daily Record file)
Posted by Jim McClureApril 19, 2020April 19, 2020 God & York County

Another in a series of posts on the religious scene in York County.

In 2010, LCBC was building a congregation in York County.

The Lancaster-based independent church was remodeling the former Saturn building on Route 30 in Springettsbury Township. It would later open there.

This prompted a community discussion on the growth of large, broadly evangelical suburban churches that were non-affiliated with a historic York County and southcentral Pennsylvania Protestant denomination.

Generally, these congregations place a primacy on the sermon in worship, which is based on a high view of the Bible. That is, they hold to the belief that the Bible is the inspired Word of God, and they believe that the crucial part of the Christian experience is a personal belief in Jesus as Savior and Lord. These evangelical congregations believe they are called to share their born-again faith with others.

Of course, there are other York County congregations, part of national groups, that are similarly evangelical,  and individual members of other churches would count themselves as born-again Christians. Still, the rise of these large non-affiliated evangelical churches in the past 30 years is noticeable and merits explanation.

The early church in this model was The Gospel Center, and I reviewed its rise under the ministry of the Rev. Ralph Boyer at the time that LCBC was building its congregation.

News that Lancaster County-based megachurch LCBC is moving to York County has raised unusual interest inside and around local religious circles.
The congregation, formerly known as Lancaster County Bible Church, draws 9,000 weekly to its three campuses in Manheim, Harrisburg and Lancaster. That’s akin to two sellout crowds at York’s Sovereign Bank Stadium.
Now it is investing millions in the former Sutliff Saturn property in Springettsbury Township, where it plans to launch another satellite campus in late 2011.
York County has one megachurch — Living Word in York Township — defined by the Hartford Institute for Religion Research as a congregation over 2,000. But Stillmeadow Church of the Nazarene in Manchester Township, Grace Fellowship in York New Salem and others attract four-digit audiences for worship.
LCBC’s success elsewhere indicates an additional skilled player among large and growing independent churches in suburban York County.
+++
Super-sized non-denominational churches in LCBC’s category have been around York County for at least 75 years.
The York Gospel Center was a leader among independent churches from 1940 to the 1990s. Non-denominational or independent status means that the Gospel Center and other such congregational churches were not affiliated with national Protestant church bodies.
The predominant Protestant churches so apparent for decades in towns throughout York County were part of such national groups. Those denominations, often called Mainline Protestants, include Methodists, Lutherans, Presbyterian and United Churches of Christ.
In its post-World War II growth years, the Gospel Center paralleled the upward spiral of American evangelicalism. The movement holds to a high regard for the Bible and the need for a personal acceptance of — and relationship with — Jesus Christ, popularized as being born again.
The growth of evangelism was fueled by the ministry of Billy Graham, development of a seminary (Fuller in Pasadena, Calif.), establishment of a periodical (Christianity Today) and development of a coalition (National Association of Evangelicals.)
This was the umbrella under which the Gospel Center prospered for decades, providing a more robust Christ-centered message and biblical emphasis than many other local churches.
Under the Rev. Ralph Boyer’s ministry, the church became a community force, first on York’s South Pine Street and after its move to a sprawling campus in Leader Heights.
+++
The Gospel Center’s Boyer family had direct links with Billy Graham, the most visible leader of the evangelicals. In 1940, the York Gospel Center invited a young Graham to York for his first crusade north of the Mason-Dixon Line.
The 21-year-old Graham came to York for a revival, which was extended a week.
Here, audiences marveled at his preaching.
“They flooded the altar when he called them,” the York Daily Record reported in 1997. “They dropped to their knees, folded their hands and fed off his electricity. They didn’t know it was Graham’s dream to be an evangelist. They didn’t know the man would eventually become world renowned.”
+++

A moment of passage in local evangelical circles came a couple of years ago with the retirement of a connector between the old Gospel Center and York County’s Grace Fellowship.
Larry Katz was pastor of the Gospel Center in the late 1980s and left to found non-denominational Grace Fellowship, a church that swells New Salem’s population each Sunday.
The growth of the 100,000-square-foot Grace Fellowship and other mammoth churches are a sign of the times in the York area.
They originated in or near the city of York, relocated to the suburbs where people had moved in increasing numbers and present an array of ministries.
Their footprint is extensive and their preaching and message so winsome that traditional denominational churches in nearby towns have felt their presence.
York countians who have never gone to church are now going, and many who long ago stopped going to church are coming back.
That’s good for them and good for the community.
LCBC will play on this York-area stage with these spiritual successors of the Gospel Center and should be welcomed to York County.
Here’s one bit of encouragement.
The newcomer should not limit the size of its stage.
Stillmeadow, in particular, has extended its ministries and services back into York City, setting an example for newcomer LCBC and other large suburban churches.
York County has spiritual and social needs everywhere, of course. But the latter is particularly acute in York City with its concentration of poverty.
LCBC and other big suburban churches must reach beyond their green campuses to the pitted city neighborhoods, perhaps in partnership with existing churches, where deeds from their members are needed the most.

More about the connection between Ralph Boyer and Billy Graham

Other posts in this series

Check out this series of Facebook posts on the religious scene in York County, past and present. 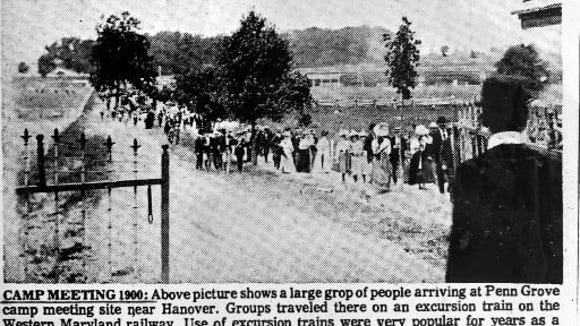