York County Maytag’s fleet: Can you locate where this photo was taken? Linked in to York County history, 2/26/13 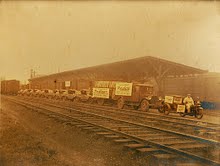 York County Maytag company put its fleet of delivery trucks on display near the South Duke Street train station in York. The company rolled its stock from its headquarters at 123 S. George Street in this undated photograph from Beth Reinhold’s collection. The site of this photo shoot is easy to locate. But where was the photograph below taken? Also of interest: What does this mystery photograph show?

Once upon a time, businessmen would work out of the Lafayette Club or rooms set aside for traveling salesman at the Yorktowne Hotel.

Some of that need for third-place space is offered by the popularity of coffee shops – chains like Starbucks and private shops like the Green Bean in York.

An alternative place to work is on the scene today – coworking space. CoWork155, in the old Sears Building, is part of a national network. People, part of the network, can work in such temporary space around the country. Or local people, looking for a place to set down their laptop, can too.

Offering space to work is a time-honored theme. And it’s nice that the new concept is located in a building with some history.

More about that Sears building, 155 W. Market St., York, courtesy of the ydr.com story about CoWork155:

1910s: The original site was constructed for use as an automobile dealership, most likely for Overland-Harrisburg Co.

1928: Sears, Roebuck and Company moves in and adds a two-story rear extension and art deco façade.

1955: Sears moves out and opens a new store in a suburban shopping complex. Soon after, Shive’s Furniture company moves in.

1985: Current owner Randy Byrnes buys the building for use as office and commercial space. Later, the space houses his staffing company, The Byrnes Group.

2013: Plans are in motion to turn the space into a membership-based coworking space for small businesses and independent workers.

Keystone Marker: The large sign, dating back to the two decades between World War I and I,  is back on East Prospect Street after some good rehab work by York city workers. Check out these photos of the Keystone Marker‘s journey.

Happy birthday, peeps: That strange marshmallow Easter candy, Peeps, has made a comeback in recent years as subject of dioramas. You can help the Peeps – made in Pa., by the way – celebrate their 60th anniversary by entering this York Daily Record/Sunday News diorama content.

Forum of the day: About 160 “Downton Abbey” and history fans attended the Tea Tuesday event Feb. 19 at the York County Heritage Trust. Some donned period costumes.

The show was the most-watched PBS series since Ken Burns’ ‘Civil War’. Did you like the way the third season ended on Sunday? Excited about the start of next season? Please comment below 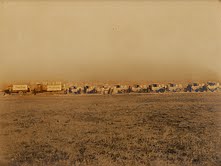 York County Maytag’s fleet at an unidentified location. Can you located it?