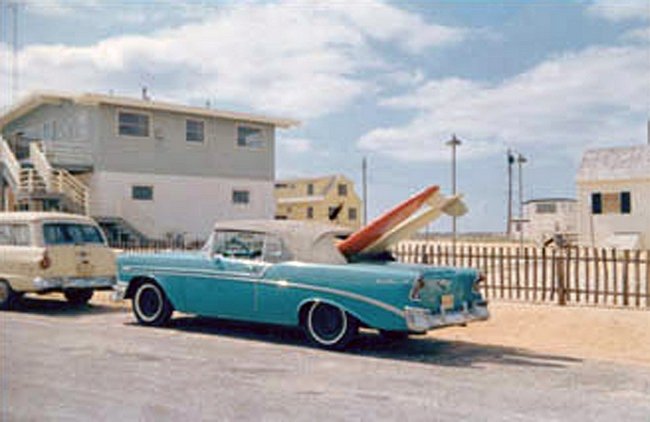 ‘My first car was a 1956 Chevrolet convertible. They called them ragtops back then. It was turquoise. I have a photograph of the car at the beach with two surfboards sticking out the back window. It was a lot of fun to drive.’ That’s East Hopewell Township’s Richard Hoff’s description of the wheels in this photograph, submitted as part of the York Daily Record/Sunday News’ ‘Remember’ oral history series. The YDR’s Buffy Andrews, whose features department produces these historical stories, found an interesting way to present past ‘Remember’ pieces using a social media tool called  New Hive. You’ll find Richard’s story in there as part of the first wheels entry as well as the video of some older wheels below. Now, some more from Richard about his car: ‘It had some quirks. The motor for the top, it would put the top down but it wouldn’t go back up automatically. It required me standing in the center of the backseat and pulling on the top to get it up. This could be a problem if a thunderstorm came up in the summertime. It was just really neat for a kid my age to have. I got it when I was a junior in high school. My parents bought it for me. The cost was $990. I guess I was a real star around the high school because the girls liked it, and the guys liked it, too.’ Also of interest: York Daily Record’s ‘Remember’ oral history series looking for a few good Woodstock memories.

A suburban York high school librarian emailed with a query.

“I have a student doing research on a topic that has been important to the history of York County. I suggested she research the race riots and racial tension in the area,” she wrote.

She was looking for sources to recommend to her inquisitive student.

I passed on this yorktownsquare.com blog post that brings together tons of reliable links on that tough moment from York’s past: Where do you go for the best source about the York race riots and trials?

It’s encouraging to get an email like that – I get them quite often. Our young people – suburban young people – are interesting in learning about our past – its terrible moments and its terrific moments.

Pathway around seminary: Gettysburg’s historic Lutheran Seminary is gaining a pathway looping around its grounds.
Blog post of the week:Back to Buffy Andrews. Over at Buffy’s World, Buffy covers some territory by recommending yorkblog.com posts: Peeps voting to St. Paddy’s Day to old Glen Rock photos to Gettysburg 150 events.

Forum of the day:  Farmers markets are almost as visible as apple trees around York County:  Are you planning to visit such a market this weekend? Also of interest: Brown’s Orchards and Farm Market of Loganville: ‘I didn’t know a peach tree from an apple tree, but we learned quickly.’

Paul Summers of Spring Garden Township owned this 1936 Hupmobile in the late ’40s. What’s a Hupmobile?